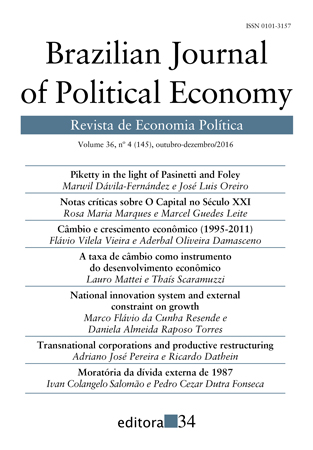 According to the literature on export-led growth models differences in income elasticities of demand for imports and exports among countries bring about different degrees of external constraint on growth. However, there is not in this literature an explanation that uses the Evolutionary concept of National Innovation System (NIS) that shows why there are differences in income elasticities among countries. Moreover, there is not a consensus about the exogenicity of the elasticities. Some authors highlight the high level of income elasticity of demand for exports in sectors with high level of technological intensity. However these authors seem to not explain the motive for this. The aim of this paper is to theoretically show the causal relation between an economy’s NIS, its income elasticities and its Current Account performance. It also aims to show the role of NIS in the exogeinicity/endogeinicity of the income elasticities. Empirical evidence and a Granger Causality Test are presented and do not reject the core argument of the paper.