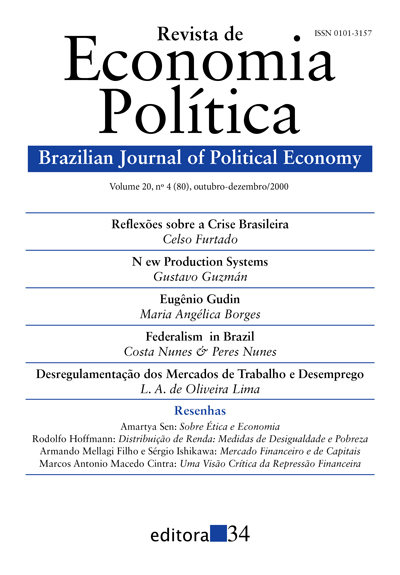 This short intervention was made by Celso Furtado during the I International Seminar of University of São Paulo on "New Paradigms of Development", held on June 14, 2000, when he received the honor to merit medal from the President of the University, Professor Jacques Marcovitch.

Auctions of Public Debt Securities by the Central Bank of Brazil: A Study of the Factors of the Dispersion of Proposals for BBCs
Márcio G. P. Garcia, Leonardo B. Rezende
Brazilian Journal of Political Economy
https://doi.org/10.1590/0101-31572000-1215
View Article

We aim at obtaining a simple econometric model that allows us to build a confidence
interval for the dispersion of the bids made by financial institutions at the central bank
weekly auctions of short-term securities in Brazil. Under competitive conditions (e. g., no coalition
between a few financial institutions) we assume that the bids’ dispersion is associated
with the volatility of the daily interest rate futures prices and the daily interest rates that had prevailed during the days prior to the auction. Based on that assumption, our model succeeds
in separating the two auctions with extremely high volatility. ln one of them, the high
dispersion could be predicted using the other interest rate markets’ data; in the other the dispersion
fell outside the confidence interval for the predicted dispersion. This can be used as
empirical evidence of an attempt to comer the market that has indeed occurred at that date.

In this article we present some estimates for the Non-Accelerating Inflation Rate
of Unemployment (NAIRU) using Brazilian Data. Two different models, Nishizaki (1997)
and Debelle and Laxton (1997), are used. The NAIRU is estimated using both the IBGE and
DIEESE data. The results show a linear Phillips curve for Brazil and allow a good estimate
of the NAIRU. For the IBGE data we obtain a time varying NAIRU while for the DIEESE
data best estimate generates a fixed NAIRU. Our results are in line with the acceleration of
inflation during the eighties and the price stability that follow the Real Plan.

The traditional perspective on credibility follows the new classical position on the
“rules vs. discretion” debate. i.e., it is argued that credibility is obtained if, and only if, the
monetary authority is kept away from discretionary policies (“tied hands”). This, however,
depends on the hypothesis of the new classical doctrine and may not be valid in models that
open the possibility of multiple equilibria. This paper tries to discuss the question of credibility
under the lights of the post-Keynesian model, offering an alternative to the mainstream
view about this theme.

The objective of this essay is to analyze the effects of the minimal nominal wage,
a monetary aggregate and the exchange rate on the price level using the Johansen procedure
for co-integration. The empirical evidence indicates the existence of a long-term relationship
among these variables and the price level that can be interpreted as a price equation. The
econometric model allows establishing the specific weights of each of these variables on the
price level. Furthermore, the empirical evidence rejects the weak exogeneity hypothesis that
confirms the existence of a feedback between these variables. This information was used
to build an econometric model in order to simulate and forecast the dynamic of prices in
Mexico with satisfactory statistical properties and structural stability.

This article examines Eugênio Gudin’s theorical production that express his new
liberal posture, which highlights his opposition to Roberto Simonsen, Cepal’s economic development
theory, Marx and followers. Gudin recognized Karl Marx as the biggest enemy
of capitalism. He attributed to the thinker the creation of the concept of capitalism with
historical connotations. Radically denying this content and balancing the conception of the
natural and eternal character of this system, he focused on capitalism as a production system
which connects itself harmonically with democracy. He worked with the pair of concepts:
economy market and democracy as an antithesis of planning and totalitarism, structuring
the discourse that stress the abstract general plan, disregarding a concrete-historical analysis
for each specific case. Consequently, every aspect that does not fit that pair is considered undemocratic
and interventionist, as an equivalent denial of the human ideal, sometimes that
should be avoided, or even destroyed.

Most of the debate about the so-called “transformation problem”; which stems
from Böhm-Bawerck’s criticism of the third volume of Capital, has a frame of reference that
attributes presuppositions and a methodology to Marx that are more suitable to the Walrasian
theory. This article discusses that question aiming at two different goals. It points the
problematic consequences to the Marxist theory of values and prices of the acceptance of
the presuppositions of the equilibrium approach. On the other hand, it offers an argument
for tackling the “transformation problem” from a strictly dialectical point of view.

This paper shows that the extension and inefficiency of federalism in Brazil is
mostly associated with gaps in the competence to tax, as well as to distortions in the system
of transfers to States and Local Governments, respectively known as State Participation
Fund – SPF and Municipal Participation Fund – MPF. We discuss the concepts of fiscal
federalism and decentralization and suggest changes that could contribute to a better distribution of resources and to fiscal discipline.

The aim of this research is to discuss the relevance of micro and macroeconomic
factors as the determinants of the present level of unemployment in some advanced capitalist economies. Through these results it will be possible to determine the importance of the conventional hypothesis that high levels of unemployment can be explained by the rigidities in the labor market as well as its policy implications.