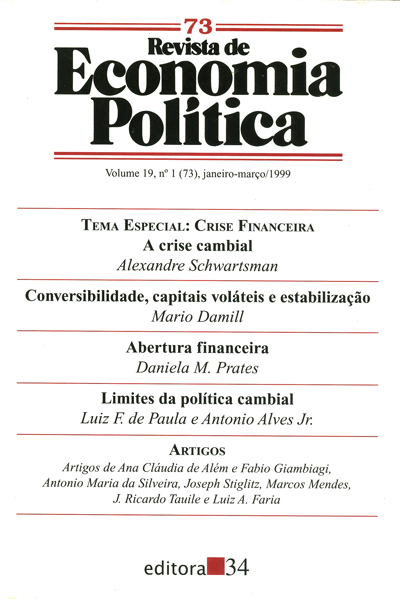 We believe that the balance-of-payment crisis literature can offer the basis to
understand the current economic turmoil in Brazil. According to our calculations the real
exchange rate requires a 15% to 20% devaluation so as to assure that the intertemporal balance-
of-payments constraint is not violated. Such appreciated currency (and the FX policy
designed to reduce the appreciation) imposes a heavy burden on monetary policy: covered
interest parity implies high real domestic interest rates in order to finance the current account.
Eventually the defense of the exchange rate requires an additional increase in interest
rates, accepted by the government, the weight of stability in the government loss function
seems to be much higher than the assigned to unemployment (or growth). Yet – despite such
preferences – the existence of a large budget deficit imposes objective limits on the use of
interest rates as a means to defend the currency. In the absence of a sharp fiscal adjustment monetary policy will no longer be credible. In this sense, the fiscal adjustment is a crucial
element to sustain the current FX policy.

This paper examines the potential effects of volatile international capital flows
on a small, commercially and financially open economy under a currency board regime, as
is currently the case in Argentine. ln the face of shocks, like those associated with changes in
the magnitude and direction of capital flows, the convertibility regime generates pro-cyclical
reactions, which pose important problems for the stabilization of real and financial variables.
In particular, the paper focuses on the stabilizing role of decisions concerning public debt
management and, in general, the administration of the Treasury’s and Central Bank’s financial portfolios (assets and liabilities, including foreign exchange reserves). The paper briefly reviews the main analytical approaches to the public sector’s financial portfolio management and, within that framework, makes a stylized examination of the distinctive characteristics of the Argentine case.

This paper discusses two strains of analysis regarding financial openness in developing
countries. Mainstream economists argue that openness brings several advantages to
these countries if liberalizing reforms have been made in the proper sequence, with liberalization
of capital flows as the last reform adopted. The central hypothesis assumed is that the
flows are guided by economic fundamentals. An alternative approach, with a post-Keynesian
theoretical basis, emphasizes that in the present context of financial globalization and predominance
of portfolio flows, capital flows are not guided by fundamentals but by short
term perspectives and by factors that are exogenous to the specific country and, thus, can be
reverted at any time, with negative impacts on the developing country.

This article assesses the impacts of Brazil’s exchange-based stabilization plan
(Plano Real) on the country’s external financial fragility and discusses alternative exchange
policy to overcome the Brazil’s external vulnerability. In order to do so, we have developed
an index for this external financial fragility, which is applied to a time series of foreign sector
variables from 1992 to 1997. The evidence shows that Brazilian external financial fragility has grown during the first three years and half after the Real Plan, particularly in 1996
and 1997. Using this evidence, the paper questions the effectiveness of the government’s
adjustment strategy for the industrial sector, based on four pillars: price stabilization, trade
and capital liberalization and exchange appreciation. Finally, we conclude that the scope
for changes in currently exchange policy is too small: the government is prisoner of a self-
-inflicted “exchange trap”.

In this lecture the author acknowledges the failure of the “Washington Consensus”
in promoting economic growth and proposes a new consensus where the state has
again an active role. He starts from some lessons of the Asian crisis and concludes for the
need of broadening the goals of development.

This paper presents the evolution of the components related to the Social Security
expenditures in Brazil. It is shown that between 1980 and 1990 the number of benefits
maintained had a yearly growth rate of 4,8%. This rate was maintained between 1990 and
1996. This fact was explained by the combination of exceptionally negative impacts with
some other specially favourable. In the first case, it is included the duplication, from 1,9 to
3,8 millions of retired people in the rural areas, between 1991 and 1994, while in the second
case the fall of more than 8% in the: benefits excepted retirements and pensions during
the current decade is the most outstanding phenomenon. Based on some hypotheses, some
projections for the Social Security expenditures for the current and the next Government are
made. It is concluded, based on some realistic parameters, that these expenditures should
grow between 4,5 – more probably – and 5,5% by year, as an average, during the next years.

This paper shows that the rules established to control state and municipal debt
in Brazil are inefficient. They cannot prevent the excessive growth of the debt nor to avoid
the approval of loans that have a negative benefit-cost relation. The paper uses theoretical
models proposed by Shepsle and Weingast (1981) and Niou and Ordershook (1985), related
to pork barrel projects, to show that The Federal Senate, responsible for the debt control,
does not have enough incentives to restrict the debt. The strategy chosen by the majority of
senators, trying to maximize the probability of being reelected, results in the approval of all
applications made by states and municipalities that want to raise loans. The paper proposes
changes in the control rules, to make them efficient.

This paper deals with five points of contemporary capitalism dynamics: 1) the
form and operation for the world financial market that functions 24 hours a day; 2) transformations
in monetary relations, specifically the relation between money and power; 3) the
influence of the operation of capital blocks over territories; 4) the exhaustion of the limits
of surplus extraction by means of wage labour exploitation, increasing degradation of the
conditions of social cohesion, and fracturing the accumulation regime; 5) the new references
that sustain and regulate the general equivalent, i.e. the foundation of the equivalencies
nominated in money. It ends by demanding a new global social contract, at national and
international levels.

A description is given of a research program on the incomplete nature of scientific
knowledge and extended to analyze the minimum curriculum for economics in Brazil and
the consequent for mutation of proposals for change. Considering the different levels of abstraction
in the pure science, applied science and the art of science trichotomy, it is observed
that the minimum curriculum prescribes suitable training for social or applied economics.
The conclusion is that a further period of two years is recommended, one to strengthen pure
economics in the basic cycle and the other for the art of economics in the phase meant for
professionalized training. Consideration is also given to specialization in pure economics
exclusively directed at teaching and research.