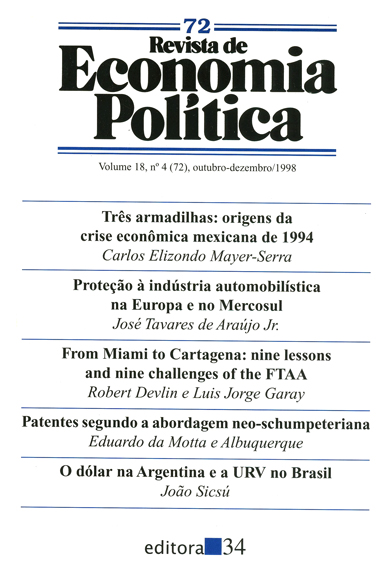 The auto industry is an international oligopoly that has a long tradition of influencing
trade negotiations and national policies. Due to the industry’s size and production
linkages, the investment decisions made by the assembly firms often generate economic consequences
that can be easily transformed into political power. This paper discusses the rules
implemented by the European Union during this decade to face this challenge, highlights the
differences in regard to the measures applied by the Brazilian government since 1995 and
suggests that the European policies are especially suitable for Mercosur.

In Miami in December 1994 the heads of State of 34 countries of the hemisphere
decided to construct a Free Trade Area of the Americas (FTAA) by the year 2005. The initiative
was backed by an ambitious Plan of Action which gained further definition in declarations
of the hemisphere’s trade ministers in follow up meetings held in Denver and Cartagena. In effect, the preparatory process for the FTAA is now in gear with eleven intergovernmental
working groups developing data bases, comparative studies, and recommendations for negotiations
in the traditional areas of market access (tariffs and non-tariff barriers) as well as
the so-called “new” issues like services, intellectual property, government procurement etc.
Drawing on several objetive considerations and putting the FTAA project in perspective, the
study concludes that while it is still in its initial stages of preparation for negotiations and
not free of problems, the FTAA process has been successful to date and indeed describes a
number of constructive lessons that can be drawn from the process concerning how to launch
integration initiatives. As this process deepens and passes into the negotiation and implementation
stages, serious challenges will emerge. The study identifies nine challenges that range
from definition of the precise objectives of the governments regarding the basic shape of the
FTAA to specification of institutional issues and the groundwork for public acceptance through
the dissemination of adequate information to the public in general.

This article uses Endogenous Growth Theory framework to examine long term
prospects of Brazilian economy. We study the behavior of those variables identified by theory
as central for development. The article argues that Brazil’s educational system performance
is poor even by Latin America standards. There are still too many market restrictions and
other barriers to trade and technology adoption. Infrastructure services and investments
are deficient and the tax system too concentrated and distorcive. Hence, while these factors
persist, it is not likely that the country will grow at sustainable rates comparable to those
experienced two decades ago. However, privatization of infrastructure sectors may spur a
temporary boom as investment increases to satisfy repressed demand.

This paper deals with the theoretical status of patents, taking the neo-shumpeterian
approach as a reference. Different characteristics of patents are analysed: i) informational
contents; ii) appropriability of innovation returns; iii) the complex trade-off between
the incentives for innovation or diffusion; iv) patent scope and its impact on second generation
innovations; v) barrier to entry. This analysis leads to an evaluation of patent laws
as different mix of these characteristics. Finally, the specificities of patent laws adapted to
less-developed countries are discussed.

This paper deals with some aspects of the Brazilian agriculture development in
the near past. The growth rate differential between agriculture and industry in the 80’s was
first analysed. The conclusion is that the kind of structural adjustment the Brazilian economy
has faced at that time has favored agriculture to grow faster than the industrial sector. The
fall in the national income caused by the external savings interruption has mainly affected
investment, made out integrally of industrial products. In this way, industrial growth was
much more severally affected than agriculture. But this would not suffice to explain the real
agriculture growth then. So, it was found that there was also an important supply side stimulus
to agriculture, due to a huge reduction in the agricultural production costs. This has
certainly been an important factor related to agriculture growth in the 80’s.

This work is about the importance of subjective elements in the capitalist productive
process. Generally grouped as knowledge and reputation they have peculiar ways of
being able to generate exchange power to their owner. Some consequences of these particularities
are examined.

Brazilian government economic plan named "Real" affected the tradable and non-tradable sectors labor market in different ways. The exchange policy and the free-market oriented process adopted provoked changes in relative prices in favour of the non-tradable sector. This article shows the increasing of the labor force in this sector and a reduction of the gap between tradable and non-tradable sector income. Furthermore, it shows the improving in labor force poverty indicators, specially those related to the informal sector. This article is based on data from PME-IBGE (metropolitan region of São Paulo, 1994, 1995 and 1996).

ln ali developing countries facing economic reform there are política! and economic obstacles to such a radical change. ln the case ofMexico, however, during the Salinas administration ( 1988-94 ), a new economic crisis exploded after serious changes had taken place and the economy seemed to have stabilized and was prepared for continuous growth under a new development strategy. By the end of the six year presidential period, the old cycle of boom and bust returned. This article seeks to understand why has the Mexican economy ended in two of the last three presidential periods with an overvalued exchange rate, high deficits ofthe current account, unsustainable short term debt, anda financial crisis. The article focuses on the Salinas administration, but shows that a similar logic led to economic crisis in the Echeverría ( 1970-76) and López Portillo ( 1976-82) administrations. lt is argued that the 1994 crisis is the result of three traps: an international context which allowed a masive entrance of capital flows, the ideology ofthe state elite, and the incentives provided by the institutional framework. These three traps were also present in the previous two crisis.

The article discusses targets, functionality, and results of the process to set relative
prices in Brazil and Argentina in the pre-desinflation period, that is before Real Plan and
Cavallo Plan respectively.