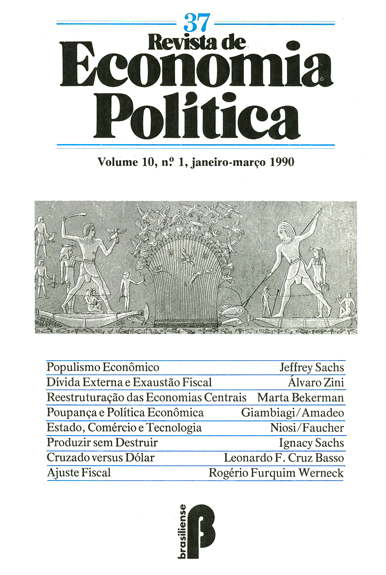 The paper criticizes the so-called dollarization of Brazilian economy. The argu-ment is based on Marx’s discussion of the functions of money. The instrument elected to act as money needs to act as means of payment, i.e. must be used to pay for the commodities been transactioned. The dollar can not yet perform this function because it does not exist in a volume sufficient to pay for the commodities been transactioned.

This paper starts denying the optimist belief that growth alone will be able to solve the employment problems of Brazil. Anyway in the 80s growth was reduced in Brazil due to the external pressure. But Brazil disposes of a huge internal market. In order to resume growth what is necessary is a development strategy that preserves the natural resources of the country. This strategy should avoid the opposite mistakes of “ecologism” and “economism”. The essential task is to build a “development reserve” in order to avoid the loss of resources, that may be origi-nated from the sub or the super-utilization of resources. An inventory of measures in this direction is presented in the final part of the paper.

The article discusses the relationship between savings and economic growth, to integrate the main contributions of the models based on the hypothesis of full employment and those, which assume the existence of idle capacity. The text de-velops a hybrid model to show that the effectiveness of the policies depends on the real situation of each economy. Thus, useful recommendations in a given context may be completely miscarrying in another one. Having this theoretical framework as guidelines, it is presented three paradigmatic cases and analyzed the effects over investment expected in each different situation, as result of official policies.

The Latin American economies have faced very different scenarios regarding their access to external financial resources. Scarcity of funds during the 1950s, a substantial increase in the supply of financial flow5 by private international banks during the 1970s, and again a stage of restrictive conditions since 1982. The work looks at the external causes that made possible these different situations linking them to the particular conditions taking place in the developed countries. For exam-ple the stagnation of industrial growth that took place in these countries during the 1970s and the external deficit showed by the US economy can help to explain the expansion in the supply of funds available to Third World countries during that decade. On the other hand the changes showed by the US economy since the end 1970s can also help to explain the deep changes in the supply of funds avail-able to Latin America. Some references to the future are also attempted.

The debt crisis caused a major setback in Brazil’s economic development in the 1980s. Stabilization policies based on contracting aggregate demand have produced an overall stagnant economic performance that alternates periods of recession with periods of growth cum rampant inflation. The attempts of adjustment have implied a near exhaustion of the public sector finances and have added distortions in the pattern of financing the economy. While the “transfer problem can be potentially settled on the real side, on the fiscal side obstacles are real and may indeed lead to stagnation in the 1990s. This paper suggests a concerted action to promote growth; one that involves a stimulus to the production of tradeables through an investments policy and a new approach to commercial and the exchange rate policies, and a refunding of the domestic and the external debts of the public sector to help solve the financial disarray of the Government.

The central hypothesis of this paper is that high-income inequality in Latin America contributes to intense political pressures for macroeconomic policies to raise the incomes of lower income groups, which in turn contributes to bad policy choices and weak economic performance. The paper looks in detail at one common type of policy failure: the populist policy cycle. This particular type of Latin Ame-rican policymaking, characterized by overly expansionary macroeconomic policies which lead to high inflation and severe balance of payments crises, has been re-peated so often, and with such common characteristics, that it plainly reveals the linkages from social conflict to poor economic performance.