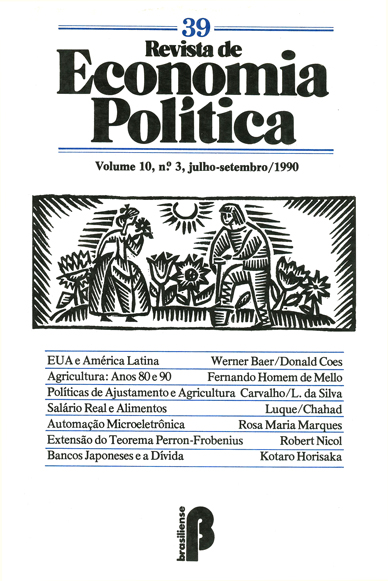 During the eighties, Brazil’s agricultural sector had a non-negligible growth, in spite of very unfavorable internal and external economic circumstances. Such a growth occurred at the same time as available credit was declining, the subsidies eliminated, with an external recession, fall in commodities’ prices and low growth in internal demand. This paper seeks to explain this growth with unfavorable condi-tions. In addition, it looks at which adjustments the sector needs to make in the case Brazil is able to resume its growth during the present decade.

According to the available data, real wage has been declining since 1980, in terms of wage goods, mainly food, even in the presence of several nominal wage policies. The main consequence has been the acceleration of the national income concentration, against the labor share. In order to solve this problem and to increase the real wages, the government should adopt a program in the direction of the economic development. To make this possible, it is necessary: (a) to concentrate the investment in the wage goods production; (b) to estimulate the wage goods demand and (c) to utilize the “normal” external prices as a price indicator to the Brazilian agriculture producer.

This paper shows that the world strategy of the automobile industry has deter-mined the modernization of Brazilian automakers. However, considering the real capital/labour relation in Brazil, the introduction of microelectronic equipment in production process not only has been concentrated on the production “key-points”, but also takes place in a quite lower level than the same plants in highly industrialized countries. The adoption of this technology has reinforced the of the Scientific Labour Organization. We can identify the extension of line concept inside the factory, as well as the deterioration of labour quality and increase of labour intensity.

Starting from a rather simple theorem by Scheffold a set of sufficient conditions is found for the system pAp Bp to have a solution with p> 1 and p > O, where A and B are nxn positive matrices. It is shown that such a system would be an extension of the system pAp Ip for which the Perron-Frobenius theorem holds.

The paper outlines the relation of Japan, especially its private banking facilities, to the Latin America foreign problem. It gives relevant background information and examines the approach taken by Japanese financial circles. Japan has now become the country with the world’s biggest trade surplus and is regarded as having the largest financial reserves. But Japan’s presence iii discussing fundamental debt relief measures has not been significant as its total amount of credit might imply.