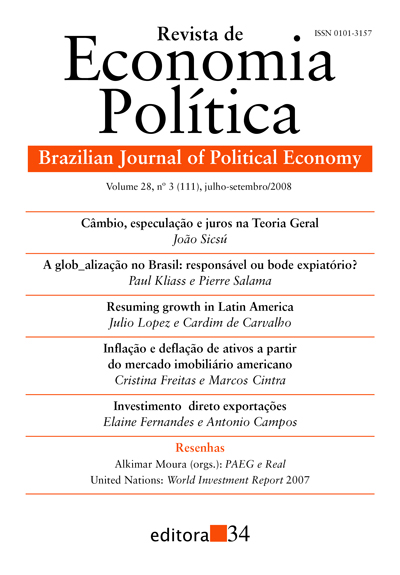 After the sequence of structural adjustments decisions suggested by the IMF, Brazilian economy became wider opened, as the consequences from financial globalization were stronger than those from commercial globalization. Nevertheless, social and economical reality didn’t show much improvement. On the contrary, figures on economic increase and inequalities show Brazil behind the average of developing countries. Even if the effects caused by “mondialisation” on weakened economies are well known, globalization can not be taken as the only guilty of weak economic increase, for maintaining the high level of inequalities or for the increase of precariousness. Responsibility must be searched on high inequalities in where operates “mondialisation”, on weakness of public policies, on irresponsible way of opening of the economy and in fiscal policy in favor of financial sector. Other countries have reached quite different results, once the have adopted different public policies, which goal was to establish control and reduction upon the negatives effects of globalization.

The authors of this paper assert that the paralysis of the state generated by the crises of the 1970s and 1980s deprived the economies of the region of an important lever to resume and sustain growth. They thus maintain that to overcome stagnation it will be necessary to reconstruct the state’s capacity to implement pro-growth policies. Following Keynes’s and Kalecki’s ideas, but also classical development economists, the authors argue, first, that short-term macroeconomic policies, to reduce unemployment and to increase the degree of capacity utilization, should be used to promote the generation of profits to firms and to wake up entrepreneurs’ animal spirits. Short-term expansionary policies should be coupled with measures to improve competitiveness and avoid balance of payments problems. They also claim that alternatives to the liberal programme will fail unless a pro-growth strategy is adopted which includes both short- and long-term policies. They thus propose that long-term policies must complete the package, signaling: a) sustained increases of effective demand in the future; and b) investment priorities to ensure that capacities will be created in strategic sectors and branches of the economy.

This paper deals with the financial crisis triggered after the default of subprime mortgages in the United States which expanded to a global systemic crisis. It is divided into a brief introduction and three sections. The first section sums up the dynamics of inflation and deflation of real estate and financial assets which characterizes finance-led cycles. The second section covers major effect of financial assets deflation on the American and European banks. The third section focuses on measures implemented by central banks in order to manage this financial crisis.

This short chapter aims to make an adaptation to a small and financially integrated economy of the monetary / financial model presented by J. M. Keynes in his General Theory of Employment, interest and money. So, this has as a goal, particularly, to adapt the chapters 15 and 17 of the General Theory basically concerned to the speculative motivations to define the composition of the assets portfolio.

This paper analyses the most important experiences with school accountability policy (SA) in Brazil. The analysis suggests that their impacts on the quality of education are not significant due to the fact that: (i) either it does not incorporate a system in which the school is responsible for the students’ performance; (ii) or the incentive schemes are not appropriately designed. Finally, it discusses the main barriers to the adoption of an efficient SA at the national level in Brazil.

The existence of increasing returns in high technology industries assigns a path dependent character to the international division of labor. Rich countries, first entrants in these industries, enjoy permanent advantages that prevent, in a free market environment, the development of such industries in middle-income countries. This dynamics allows the former group of countries to experience a higher growth rate of labor productivity than the latter, and, as a result, increases the gap between the workers’ standard of living in these countries. It is up to the States of middle-income countries the task of devising development strategies capable of breaking such pattern and improving the international distribution of income.

This paper suggests a reconsideration of the principle that public deficits should be financed by public debt. Two main reasons are offered. First, it is admitted that public debt is an economic variable whose time behaviour is better described by a first difference equation instead of an accounting identity. The convergence condition thus obtained requires either a nominal negative interest rate or that government bonds are used to raise tax income, hypotheses not theoretically granted. As a consequence, if primary surplus is not sufficient to match interests’ payment, it will be observed an explosive trend in the public debt, the due interests and the money issuing. Therefore, it lacks support to the idea that public debt prevents inflation. Second, it is shown that financing public deficit through money issuing leads to a stable equilibrium money stock. The general conclusion is that, in order to simultaneously promote economic growth and inflation control, money issuing is preferable to public debt.

Brazil, in the 1990s, assumed a remarkable position as a host of foreign direct investment. It is worth mentioning that the service sector received the highest proportion of foreign investment. This market seeking strategy was responsible for the growth of the Brazilian imports. The results are confirmed by the performance of foreign enterprises into different groups of activities. Those enterprises with majority of foreign capital have increased their imports the most from 1995 to 2000. Therefore, during the 1995-2000 period, this study does not support the view that foreign investment has directly improved the performance of the Brazilian exporting sector.

Bargaining power of the unions and collective bargaining in the industry of the Rio Grande do Sul, 1979-1995
Carlos Henrique Horn
Brazilian Journal of Political Economy
View Article

This paper analyses the relationship between bargaining outcomes in seventeen units regarding the manufacturing sector in Rio Grande do Sul, and change in the relevant economic environment from 1979 to 1995. Theories on the determinants of bargaining outcomes are discussed in order to provide a basis for hypothesizing about the specific case. Statistical outcomes suggest that collective bargaining have been basically influenced by unemployment, manufacturing relative prices, the stabilization policies starting in 1986, and, specifically for negotiated minimum wages, change in the official rates of minimum wages.