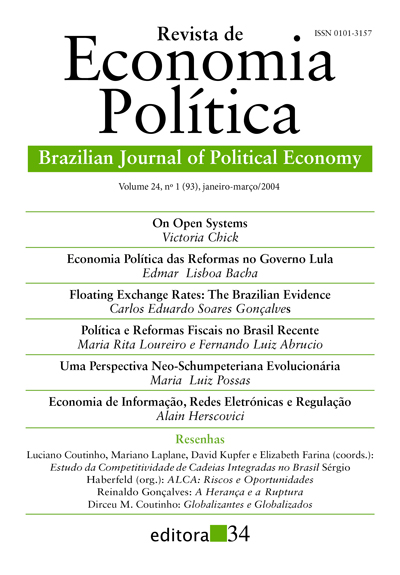 To many, economics is seen as increasingly divorced from reality. I shall argue that one of the causes of this divorce is the attachment to closed-system theorising, and advocate instead the method of open systems with partial and temporary closures. Definitions of closed and open systems are examined. It is evident that there are many different criteria which may define open systems. Theorists differ in their emphasis on one or other criterion. There are also different dimensions of openness: openness to non-economic factors; the openness of economic theories themselves; the interplay of micro- and macro-economics; and the treatment of time. These are explored, using Keynes’s General Theory as a case study of an open system.

“Elements for a Political Economy of the Reforms in Lula Government”. Under the hypothesis that structural reforms are positive for the economy, it is argued that, in a government of the 'right', there exists stable political economy equilibrium: some reforms are made and the economy has a median performance. In a government of the 'left', such median equilibrium is unstable. A situation of double equilibria is characterized: the government either succeeds fully or it fails miserably. The conclusion is that the success of Lula's government will depend on the result of a race between the of his popularity, on one hand, and the improvement of the economy, on the other.

Some authors have advocated that shifting from fixed exchange rates to floating regimes has not delivered better economic outcomes to developing countries. As the argument goes, pervasive fear of floating in these economies has prevented s in real interest rates and, more importantly, has been a hindrance in the way towards more monetary policy autonomy. This paper presents evidence suggesting this may not be the case for Brazil. More precisely, there are signs that fear of floating was less acute here (presumably due to low exchange rate pass-through) than elsewhere, and also that policymakers are now targeting monetary policy principally to domestic objectives.

“Politics and Fiscal Reforms in Recent Brazil”. This study focuses on the economic and political framework in which fiscal changes take place in Brazil in the past two decades, in the general context of the State reform. Emphasis is given to the Cardoso government’s reforms which are examined not only from a macroeconomic perspective but also from the viewpoint of democratic accountability. Without disregarding the role of critical conjunctures, the article also stresses the incremental nature of these reforms and indicates that successful ones take place gradually and that each step taken has influence on the path ahead.

“Selected Efficiency: A Neo-Schumpeterian Evolutionary Perspective on Normative Economic Issues”. This paper intends to address an almost completely disregarded field in Neo-Schumpeterian Evolutionary economics: that of normative theory and competition policy issues. The amount of both modeling and appreciative theorizing that has been produced under this approach is already impressive, but it lacks a corresponding effort on normative implications of the theory. After discussing the limitations of the static Pareto-efficiency tools for competition analysis and policy, especially in antitrust, some scarce contributions towards dynamic efficiency and related concepts are briefly reviewed. Finally, an alternative dynamic efficiency concept labeled “ive efficiency”, focusing on the efficiency of the market as a ive environment (apud Nelson & Winter), is introduced and the basic lines of a possible analytical framework for its application are suggested.

“Information Economics, electronic networks and regulation: elements of analyze.” This paper aims at analyzing the different components of the so-called new economy. The first part, essentially theoretical, deals with the various conceptions on both the nature and role of information in the working of markets. The second part shows the microeconomic characteristics of electronic networks, evaluating its competitive properties. In the third part, after having outlined the current accumulation regime, the relationship between networks development and the implementation of a new mode of regulation are discussed. As regards this matter, alternative interpretations of Solow paradox are offered.

“Currency Union in Mercosul”. Nowadays, influenced by the European experience, several Brazilian economists have given special attention to the possibility of a currency union among the countries of Mercosul. This paper makes a brief analysis of the main theoretical aspects that represent the basis for the proposition of a currency area. Besides this, the paper shows two distinct views in the national literature concerning the hypothesis of the creation of a currency area for the Mercosul. The main conclusion of this article is that the proposal mentioned above is not feasible, because the costs of macroeconomic coordination are too high.

This paper draws upon Bresser-Pereira and Nakano (2003), in order to outline a pro-poor growth strategy for middle-income countries. This strategy avoids the pitfalls of the neoliberal model implemented in several countries in the aftermath of the 1982 international debt crisis, and is conducive to income distribution and sustainable growth simultaneously.

This paper seeks to incorporate one of the most recent theoretical progresses in institutional economics to the analysis of the institutional evolution of Brazil during the period 1956/1961: an endogenous rational choice model for institutional dynamics. The Kubitschek period was chosen because it was a moment of our recent history where it was tried to implement significant institutional changes in our political, economical and social institutions seeking to accelerate the rhythm of the industrialization process. The institutions implanted however did not present the self-reinforcement property nor in the weak sense, nor in the strong sense (terms defined in the paper), being for this subject to be undermined by endogenous processes. This institutional arrangement therefore, that was initially capable to sustain itself in conditions of fast industrialization with relative stability of prices, was progressively weakened, becoming self - enforceable only in conditions of economic stagnation and accelerated inflation. It is argued finally that the analysis outlined above can be useful to understand a little better the general nature of the processes of institutional change.