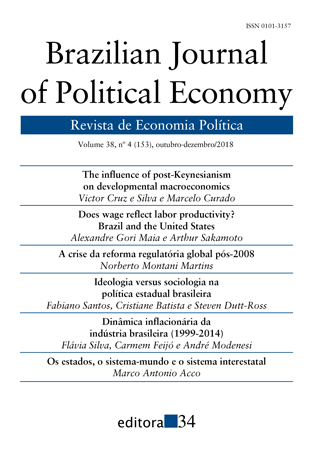 Developmental macroeconomics, the economic theory that grounds new developmentalism, is a heterodox approach whose establishment was deeply influenced by dissonant schools of thought. Among these, post-Keynesianism occupies a special place. This essay aims at identifying the aspects of developmental macroeconomics in which this post-Keynesian influence is more notorious. To serve this purpose, we compare the economic diagnoses, social objectives and policy prescriptions defended by the partisans of these two schools of economic thought. Our conclusion is that despite the significant influence of post-Keynesianism in the formation of the new developmentalist strategy, there are several aspects of this strategy that must be understood as an original contribution of the Brazilian developmental school.

The present paper analyse show the regulatory reform that followed the 2008 international financial crisis influenced the processes that structured the contemporary global financial system. We argue that there form aimed to re-regulate financial markets, change global banking business models, and limit financial institutions’ ability to external izerisks and leverage. Our conclusions point out that regulatory changes, albeittimid in some areas, were able to influence the processes that structured the global financial system and then changed its modus operandi and possibilities for expansion.

The article proposes an exploration of possible determinants of the variation of health and educational spending in Brazilian states between 2002 and 2013, like the degree of economic development of the different states, as defended by the classical hypothesis of the political sociology, or configurations of the political framework, as the ideology of state governments and their alignment with the federal government, as considered by the literature of political science. The results support the validity of the central hypotheses of both literatures, which should stimulate the analysts to search for a unified theory of governmental behavior in the social area in the Brazilian federative context.

This paper investigates the dynamics of the Brazilian industrial inflation during 1999-2014. Based on the post-Keynesian theory on price formation and distributive conflict, the paper discusses the importance of sectoral differences for the analysis of Brazilian inflation in the 2000s. These differences are important since they can lead to heterogeneous reactions in the face of different inflationary pressures. Micro and macroeconomic approaches are considered in order to contribute to the diagnosis of Brazilian industrial inflation. An econometric exercise with panel data is conducted to estimate the effects of the impact of changes in costs, wages, demand and lagged prices on changes in final prices. We find that, considering sectoral heterogeneity, cost shocks are the main explanatory variable for the inflation dynamics.

The states, the capitalist world system and the interstate system: a critical analysis on the contributions of Immanuel Wallerstein
Marco Antonio Acco
Brazilian Journal of Political Economy
https://doi.org/10.1590/0101-3157-2018-2653
View Article

National states are one of the central issues in the contemporaneous debate in the world, an extensive agenda that has generated important approaches in harsh dispute on the pace, direction, and depth of possible transformations of the state in the last decades. This article aims to reconstruct and critically analyze the concepts, attributions, possibilities, roles an impasse experienced by national states in the modern world system as found in the formulation of Immanuel Wallerstein. With this purpose, this article makes a journey through Wallerstein’s extensive work, retaining the main components of his formulation on the State in its interactions with the capitalist world system and the interstate system.It begins with a synthesis of Wallerstein’s formulations on historical systems as the correct unity of analysis, the historical forms of these systems, until the concepts of capitalist world system, State and interstate system as crucial categories. Based on these foundations, then, it explores Wallerstein’s analysis on national States today, the contemporaneous crisis of the world-system, as well as the possibilities and dilemmas for the action of national States in this context. The conclusions address limits and opportunities offered by Wallerstein’s challenging approach. When national solutions seem to fail around the world, a return to Wallerstein’s work and his perspective centered on the capitalist world system may reveal relevant findings.

The purpose of this short article is to contribute to the unorthodox approach of the International Competitiveness (I. C.). The theoretical perspective adopted is the neo- Schumpeterian combined with the so-called 'Dynamic Capabilities' approach. From a methodological viewpoint, it seems appropriate to describe this work as a comparative-historical one.

The United Nations Framework Convention on Climate Change meets again in Bonn for the COP23 in the fall with Fiji as host, the focus should be upon the GOAL II in the COP21 Treaty: decarbonisation with 30-40 per cent of 2005 levels until 2030. Several countries now meet the GOAL I of halting the rise in CO2 emissions. And the rest should be asked and helped to do so. But the GOAL II is a very big challenge. It can only be fulfilled with massive investments in solar panel parks.

The article analyzes the impact of social capital on income and poverty reduction in Brazil. Through the main components technique and based on the World Values Survey, a social capital index was constructed considering three categories of indicators: participation in organizations / associations; Density of the partner and trust in people. It was concluded that in addition to social capital contributing positively with income, its impact is greater than the impacts caused, for example, by the fact that the individual is employed, married or white. In addition, the lower the income scale, the greater the impact of social capital on income generation and consequently on poverty reduction.

The Second National Education Regulatory Framework (2ndLDB), enacted in 1971, changed the grade configuration of schooling levels in Brazil. This is change made it challengingto construct a validand reliable education spending data profilefor 20th century Brazil. Previous work on the economic history of education in Brazil used the data provided according to the thesis of Maduro (2007). Wjuniski (2013) used that database and ran structural break tests and concluded that the Brazilian government underinvested in the expansion of secondary education. However, Wjuniski did not consider problems concerning: (i) data reliability and (ii) the effects of the 2ndLDB on education expenditure data. This paper shows that data on education spending in Brazil does not allow us to assert that there was an underinvestment in secondary education from 1971 onwards.

In the book Economia BrasileiraContemporânea (Brazilian Contemporary Economy) Lavinia Barros de Castro states that the Collor Plan "received criticism from all sides", the "the monetary assets blocked was considered an unacceptable state intervention" and that the freezing of prices, the fiscal adjustment and the recessive character of the Plan were also questioned. We argue that these claims are misleading. Analyzing articles, columns and interviews published at that time, we argue that the economic plan received, during its first weeks, a wide support from businesspeople, politicians, economists and even the general population.