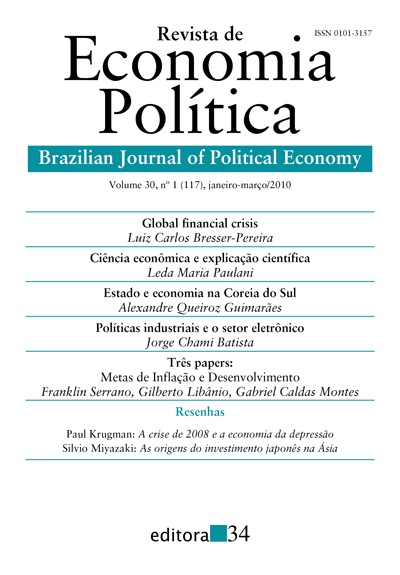 The 2008 financial crisis and neoclassical economics

The 2008 global financial crisis was the consequence of the process of financialization, or the creation of massive fictitious financial wealth, that began in the 1980s, and of the hegemony of a reactionary ideology, namely, neoliberalism, based on self-regulated and efficient markets. Although capitalism is intrinsically unstable, the lessons from the stock-market crash of 1929 and the Great Depression of the 1930s were transformed into theories and institutions or regulations that led to the “30 glorious years of capitalism” (1948–77) and that could have avoided a financial crisis as profound as the present one. It did not because a coalition of rentiers and “financists” achieved hegemony and, while deregulating the existing financial operations, refused to regulate the financial innovations that made these markets even more risky. Neoclassical economics played the role of a meta-ideology as it legitimized, mathematically and “scientifically”, neoliberal ideology and deregulation. From this crisis a new capitalism will emerge, though its character is difficult to predict. It will not be financialized but the tendencies present in the 30 glorious years toward global and knowledge-based capitalism, where professionals will have more say than rentier capitalists, as well as the tendency to improve democracy by making it more social and participative, will be resumed.