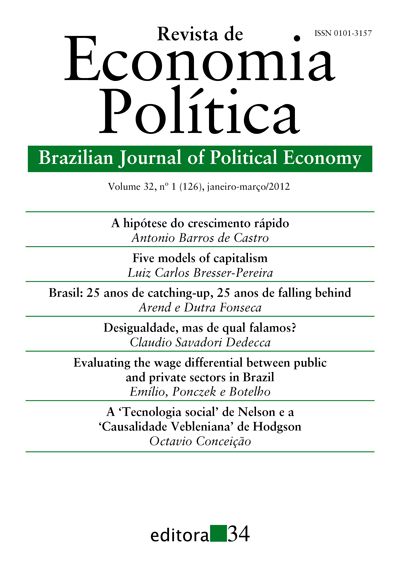 After the 1981-2003 quasi-stagnation, the Brazilian economy signals that it is back to fast growth. The aborted growth spurts in this period accumulated an expansion potential that is now emerging. The growth frustration was particularly significant in the case of the growth surge beginning in 1999, as an outcome of the large 1999 depreciation of the real and the substantial 1990s increase of productivity. Now this repressed growth is being spontaneously liberated. It may be additionally liberated by adequate economic policies. Improvements in macroeconomic policy and the implementation of mini micro reforms are consistent with this incremental approach.

Besides analyzing capitalist societies historically and thinking of them in terms of phases or stages, we may compare different models or varieties of capitalism. In this paper I survey the literature on this subject, and distinguish the classification that has a production or business approach from those that use a mainly political criterion. I identify five forms of capitalism: among the rich countries, the liberal democratic or Anglo-Saxon model, the social or European model, and the endogenous social integration or Japanese model; among developing countries, I distinguish the Asian developmental model from the liberal-dependent model that characterizes most other developing countries, including Brazil.

The present paper discusses the Brazilian industrial development under a neo-schumpeterian perspective in the period after 1955. The hypothesis is that, in the last 50 years, Brazil spent the first 25 years catching up and, next, the following 25 years falling behind. The 1955-1980 period, by means of international funding, allowed catching up with the paradigm in maturation within the fourth technological revolution. However, in this period, it was determined the main debilitating elements for the country's entrance in the new techno-economical paradigm of the fifth technological revolution which emerged in the middle of the 70s. It is in the strategy to internationalize the economy, granting the mutinational companies the key-sectors of the national economy dynamics during the catching up period, the main element of dependence in the journey that conditions the current performance, responsible for technology subordination and keeps the Brazilian economy with low dynamism.

What inequality are we talking about?
Claudio Salvadori Dedecca
Brazilian Journal of Political Economy
View Article

The essay was motivated by the recent disclosure of documents by multilateral development institutions demonstrating that the last phase of economic growth has tended to aggravate socioeconomic inequality. The purpose of the current analyze is to debate the advances that have been made and the persisting methodological and analytical difficulties in the debate on inequality as well as to contribute with a few insights towards the construction of a multidimensional view of a recurring and inherent aspect of capitalist development.

This paper uses a rotating panel of households to analyze wage differentials between public and private sectors in Brazil. Focusing on the transition of individuals between jobs available in the public and private sectors and controlling for individual time invariant characteristics, we find evidence of small wage differentials in favor of the public sector.

In 1961, during the Congress of the German Society of Sociology, two great theoretical references of the XX century faced in a historical debate about the logic of the social sciences. In addition to methodological issues strict sense, the confrontation became known as a debate between positivism and dialectic. The article first deals with the theoretical trajectories of Popper and Adorno and the relation of their theories with their political and ideological certainties. On one hand, the trajectory of the Popperian epistemology is examined, its contributions and vigorous attacks on Marx in what he called ‘poverty of historicism” and false predictive Marxist world, and, on the other hand, the role of Adorno in the Frankfurt School, his criticism of totalitarianism and the defense of a critical emancipatory reason. The article also deals with the confrontation itself, the exposure of Popper’s twenty-seven theses that culminate with the situation logic and the method of the economy as exemplary for the social sciences and Adorno’s critical perspective of sociology and society as non-separable objects. In conclusion we show how the articulation of theory with the weltanschauung of each author helps to clarify the terms of the debate and how the confrontation contributed unequivocally to the dynamics of scientific progress and for the critical history of the ideas.

This paper aims to discuss the role and the relationship among the concept of institutions and the economic growth process, through the Neo-Schumpeterian and Institutionalist approaches. Both of them constitute a new research agenda differentiated and opposite to the mainstream. In the first part of the paper we discuss the research agenda proposed by Richard Nelson who emphasizes the necessity to unpack the institution concept throughout the social technology notion. In the second part we discuss Geoffrey Hodgson’s contribution that suggests ing this process in an evolutionary perspective, which has in habits, norms and social behavior his major characteristic.

The focus of this paper was to analyze the relationship between municipal public education spending and students' academic achievement, evaluated according to IDEB (Index of Basic Education Development) of 2005. The following databases were used: School Census 2005, Brazil Exam (mathematics evaluation applied to students from fourth grade of elementary school) and Finance of Brazil (FINBRA). A multilevel model was estimated and the results suggest that simply increasing the percentage of municipal expenditures on education or the percentage of spending on primary education in relation to municipal expenditures on education do not automatically guarantee improvements in the quality of education.

The Brazilian market in the XIX century: an approach through the cabotage commerce.
Renato Leite Marcondes
Brazilian Journal of Political Economy
View Article

The maritime commerce consisted of the main way of circulation of the goods between the Brazilian provinces until the second half of century XIX. Although the relatively big importance of the flows of commerce with the exterior, we note significant exchange of goods by sea between the Brazilian regions since the colonial period. A part of these exchanges derived from products destined in last instance to the foreigner or imported of the exterior. However, another part elapsed of national goods that had not arrived at be exported to the international market. Many goods for the colonial and imperial consumption had circulated by the Brazilian coasts in expressive sums. From the information raised for the imperial period, especially the decades of 1860 and 1870, we verify that most of the goods commercialized between the provinces consisted of national products destined to the internal consumption.