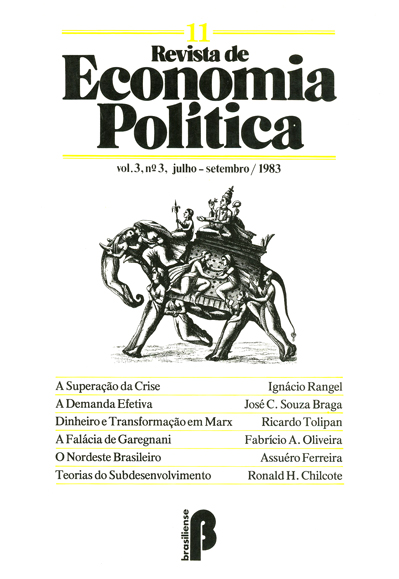 The author characterizes the Brazilian economic crisis within the context of the present world economic situation based on an analysis utilizing the concept of the Kondratieff economic cycle. He reaffirms the necessity to prioritize economic growth and indicates measures which could be taken for the reorientation of domestic production, the development of new financing mechanisms and the redefinition of Brazil’s relationship with the rest of the world, oriented not only in terms of managing the present crisis but also overcoming it.

As regards the controversy surrounding effective demand and the work of Michäl Kalecki, it must be understood that he not only formulated an adequate theory of economic cycles but, by revealing the limits of this theory, dealt with a more complex set of problems which are specific to the movement of capitalism: the question of the simultaneous determination of cycles and trends. To develop this theory entails reformulating the above concepts in order to grasp the antinomy of the trend in capitalism and its interactions with fluctuations and changing circumstances. This in turn requires a critique of the concept of economic time, or more precisely a clarification of capitalist temporality. It is also necessary to re-assess the theoretical status of the principle of effective demand, in relation to a theory of capital and of capitalist calculation, within a theory of instability; the temporalization of this principle, as effected in macroeconomic models is not sufficient for the comprehension of capitalist dynamics as a whole.

The transformation problem is one of the basic features of the marxist discourse and of its critique o1~ Classical economics. The Bortkiewicz solution to the error in the algebraic formulation of this problem involves strict speci-fications of the numéraire used to express prices and values. This paper aims at showing that these specifications not only do not contradict Marx’s monetary theory, but really implies it once we abandon labour as the substance which determines value. The paper also suggests that money as the “general equiv-alent” is the true medium trough which transformation is possible and should substitute for “labour” in expressing the idea of a “social energy” which determines capitalistic exchange-values.

The objective of this paper is to present a critique of Garegnani’s essays on the Marxian labor theory of value. Garegnani has been seen as one of the main representatives of the neo-ricardian school, which breaks away with Marx’s labor theory of value. According to Garegnani the labor theory has proved to be unable to provide adequate answers to those objectives it poses. This paper is aimed at showing that Garegnani’s position, which reduces the meaning of Marx’s labor theory to a non-circular determination of prices and profit rates, is fallacious. Furthermore, the paper tries to show that the importance of Marx’s theory goes far beyond the role that Garegnani has assigned to it, and that it constitutes, in fact an indispensable tool to understand the laws of motion of the capitalist system.

The first part of this article analyzes the mechanism of regional subordina-tion which had its start in the thirties. This mechanism tended to strengthen the structural factors, which inhibited an internal dynamic. Later it seeks to explain how this subordination was consolidated in a higher stage of monopoly capitalism where the State was fundamental element, which made this policy viable. It concludes by examining the limits of the reproduction of capital on a regional level from the perspective of a dif-ferentiated and limited geographical space.

The evolution of the Brazilian petrochemical industry is analyzed based on the economic development model set up in the second half of the fifties and on the political system established in 1964. The State undefinition in the first period of this industry (48 — 64) holds down the sector growth in the adequate proportion to the economie model requiring a great leap in the second period (64 — 80), possible by the enterprise (association among the State, local capital and multinationals). When the conditions that support this enterprise model are finished, it starts to fall down and the local private entrepreneurs get more dependent on their own capabilities to compete with the multinationals in a process that seems to draw the characteristics of the third phase of the industry.