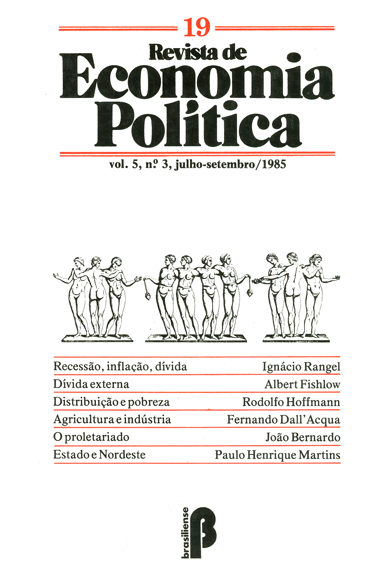 The author criticizes the theses according to which the labour force is produced outside the capitalist production process. In the model he proposes the family-wages covers both the production of goods and services and the production of labour force. The proletariat considered as input produces surplus value and considered as output embodies surplus value. The author analyses the relationships between the labour force as output and as input. He also intends to show that the market role m the capitalism is minor and the state role is the central one. In changing from output to input the labour force is devalued by the process of the relative surplus value. At last he analyses some implications of this model as far as thc social struggles are concerned.

This research addresses the relationship of agriculture and industry in the process of capital accumulation in Brazil from the late twenties through the early sixties. It is an exploration of the dynamics of the intersectional linkages during the period and of the effects of state policies on those dynamics. It was shown that while Brazilian agriculture performed its five traditional functions throughout the period from 1930 to 1960, its performance was not a history of steady progress on each front. During the fifties the five functions appeared to contain internal contradictions which were associated with the establishment of the durable consumption and heavy capital goods industries. The state policies were seen as reinforcing those contradictions, which contributed to the crisis in the Brazilian economy of the early sixties.

Using yearly data on the distribution of income among families, in Brazil, the pa-per shows that m the period 1980-83 the inequality of that distribution is stable but that the absolute poverty did increase, as a consequence of the economic crisis. The analysis is carried out for Brazil and for four regions: Northeast, Southeast, South and Middle-West. It is shown that the decrease of average family income was greater in the most industrialized regions.

The year of 1984 was characterized by important advances in coping with the developing country debt burden. It is no wonder, in view of these gains registered in 1984, that there is certain complacency and even smugness in regarding the continuing evolution of the debt problem. This paper examines four principal issues on which the future evolution of the debt problem depends. First is the influence of international economic activity on the performance of the debtor countries. Second is the permanence of developing country adjustment. ‘Third is the stability of the new debt regime that is now in place. And fourth is the likelihood of the new external resources to replace the decline in commercial bank lending that is generally forecast.

When the economy is in recession, inflation accelerates in the Brazilian economy. In order that prices go up during recession corporations, in an oligopolized economy, reduce production and increase prices, instead of doing the contrary, as conventional economies teach. To overcome recession it is necessary that entrepreneurs take advantage of the new opportunities of investment Ira new dynamic sectors of the economy. In Brazil public utilities is the sector that has more opportunity of growth. Private enterprise, national and multinational, that have now idle capacity and excess savings will transfer these savings. To public utilities as soon as institutional and financial arrangements make this possible.

The document proposes that the origin of the foreign debt problem faced by developing countries be found in the way international capital markets work. A mistaken optimistic view concerning financial market’s behaviour in the 70’ might extend for many years, since debtor nations have adapted their economic structures to a great amount of external funds; on the contrary, a shortage of funds is expected in this decade’s last years. These tendencies will deeply mark social and economic performances of most countries in this region. Some of the main options that these nations will be forced to face are analyzed in this text. Apart from the imperative need to fight for a change in the way foreign debt has been renegotiated, it is also necessary to reorganize their external economic policies. This occurs through the intensification of economic cooperation among debtor nations and through initiating a new phase of import’s substitution now being coordinated by means of import’s expansion. Some facts responsible for a better capacity of handling and adjusting different countries according to the economic strategies they have adopted in the past and to the political situation each country has to face are also demonstrated here.

Examining the case of the Northeast, this work seeks to discuss more profoundly the nature of the modern State in Brazil and the political sense of planning which envelops its actions. It proceeds from the principle that the question of the “Two Brazils” — which while no longer a polemical point in purely economic analysis —continues as a controversial element in the treatment of the national political question, especially with regard to the Brazilian State. Thus, the ideas that the formation of the bourgeoisie State in Brazil carne about through an ambiguous coexistence with an oligarchic, conservative and anti-industrial State is a tradition that serves merely to confuse our understanding of the particularities of the constitution of the modern State, social classes and regional social movements. Therefore, the recovery of the idea of unity in the study of the formation of the State appears as a suggestive approach for rediscussing primordial aspects of the national and regional political question and for understanding certain basic elements of the capitalist transformations which, in evidence in the Northeast since the end of past century, have assumed sharper contours during recent decades.