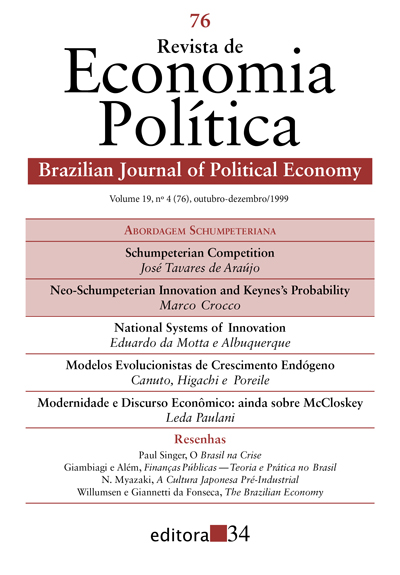 Using the Schumpeterian notion of Creative Destruction, this paper discusses
the role of antitrust in the process of economic reform and illustrates with the Latin American
case. According to that notion, competition is a process wherein firms strive to survive
under an evolving set of rules that engenders winners and losers. The main instrument that
allows firms to be ahead of their competitors is the introduction of informational asymmetries
that may result either from technological innovation, rent seeking or organized crime.
To the public authorities this process implies two challenges. The former is to identify the
situations that require intervention and the latter is to ensure that innovation will be the
only available instrument for creating in- formational asymmetries.

The aim of the paper is to show that Keynes’s concept of probability can enrich
the understanding of the process of the introduction of innovation offered by the Neo-
Schumpeterian approach. To deal with uncertainty Neo-Schumpeterians introduce the concept
of routines. What is suggested here is that the concepts of Degree of Rational Belief and
Weight of Argument, which come from the Keynes theory of probability, when used together
with the concept of routines, help understand the rationality of the decision-making process
in introduction of an innovation.

This paper suggests a tentative “typology” for Non-OECD National Systems of
Innovation (NSIs). Three main categories compose this tentative “typology”: “mature” NSIs,
catching up NSIs, and “non-mature” NSIs. This paper investigates theoretical mediations
which may be necessary if the NSI concept is to be applied appropriately to Non-OECD
countries. Science and technology statistics are used to evaluate the suggested “typology”.
Basic statistics (GDP, R&D expenditures, education, patents, and papers) are presented. Data
from forty-six countries are used for statistical exercises. The findings of this paper hint
that it is possible to cluster different countries around science and technology indicators.

The paper presents the main lines of research followed by evolutionary models of
endogenous growth. The authors intend to show how those approaches constitute a research
program as an alternative to the one followed by the “new” endogenous growth models.
After a comparison between evolutionary and new classical micro-foundations, the text displays
a synthesis and a sample of modeling exercises along evolutionary lines.

This paper is part of a debate on rethoric in economics that has begun with the publication of the works of McCloskey and spilled over to Brazil. A paper of mine, written in 1992, produced an intense polemics that appeared in its entirety in the book edited by Rego (Retórica na Economia, São Paulo, editora 34, 1996). In the present work I trie to answer the critics to my position confronting the appointments of McCloskey with those of Rorthy’s pragmatism and considering, on the other hand, the different meanings envolving in McCloskey’s use of the term “rethoric”.

This paper analyzes the role of the State and government in development. In the
first part, the approach used is delimited and the needs and real possibilities of public participation
in the development process are specified, concluding with the need to reform the
public administration. The scope of action of both the State and the government is considered
after. The former includes governance; economic institutions and security; while the latter
covers national infrastructure in a broad sense, fiscal and financial sector management,
social policies, public services, and productive development. Its conclusion leads to the notion
that “correct” policies are not enough, without the institutional support they require.

The purpose of this article is to present a critical analysis of Post-Keynesian approachs that support the thesis of an extreme endogeneity of money creation. Neither horizontalists nor monetary circuit theorists give special attention to the dual and dialectic aspects of banks, profit oriented institutions which are responsible for money creation and for financial intermediation. Because of these aspects, banking competition is the core of financial instability and credit dynamics. Having as their main goal competition for profits, banks act procyclically helping to amplify the instability of the capitalist economy, and to stimulate financial speculation activities instead of industrial investments, which is the source of wealth and material reproduction in capitalist economies.

A political economy model is developed to provide a rationale of monetary policy
in high inflation regimes, such as the Brazilian experience until the advent of the Plano Real.
Decision making of monetary policy is assumed to be decentralized, where several decision-
-makers competitively determine the quantity of money. It is shown that equilibrium inflation
is higher than under the alternative monetary regime where decision making is centralized at
the Central Bank. An important additional feature of this political economy model is that it
does not rely on time-inconsistency to generate high and sub-optimal inflation.

This paper reviews the effects of Plano Real’s macroeconomic policies on agriculture
and discusses the new perspectives open after the strong devaluation of our currency in
January 1999. Brazilian agriculture was severely affected by the combination of high interest
rates – overvalued exchange rate. In addition, it has had to face the problems of excessive
reduction in import tariffs, of financed imports and of low economic growth rates in recent
years. Some favorable changes in international trade offset, at least partially, the problem of
currency overvaluation. Brazil has always been recognized as having a strong comparative
advantage in agriculture. The devaluation which occurred, beginning in January 1999, opens
better perspectives for the country to exploit its competitiveness in international markets.

The aim of this paper is to investigate possible inconsistencies between J. S. Mill’s
methodological positions on the science of Political Economy and the historical view of man
and society that he eventually embraced. The analysis of his main propositions on method
reveals that Mill was inconsistent to hold – as he did – the universal validity of investigating
this science by the deductive method. But two examples selected from his Principles show
that, as a political economist, Mill used alternative methodological procedures when the
occasion demanded, being more consistent as a scientist than as a philosopher of science.