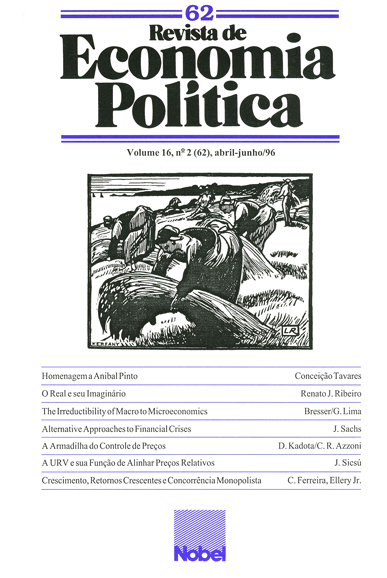 This paper examines the symbolic character of the Brazilian new currency, the
Real, whose name suggests its ambition of not only represent a value, but to be the reality
itself. Also, the utilization of natural pictures instead of historical ones on the stamp of the
new bills points the wish of giving the character of reality to the currency launched in 1994,
meanwhile shows the inflation as product of a disordered imagination. Therefore, the new
currency symbolic representation matches very well to the political discourse that sustains
the Real.

This paper criticizes the idea, widespread today, of the need to seek microfoundations
for macroeconomics. The authors argue that these two fields of economics,
micro and macroeconomics, use different methodological approaches. Microeconomics
deals with economic problems according to a logical-deductive methodology, while
macroeconomics is more characterized by a historical-inductive approach. The attempt to
reduce macroeconomics to microeconomics, or vice versa, brings only an impoverishment to
science and economic debate, in which, ideally, there should be room for a great pluralism
of ideas and theoretical currents.

This text analyzes the occurrence of crises in the financial markets of the so-called
emerging economies. In the second section, we analyze the factors that can lead to financial
crises in these markets, as well as suggest some macroeconomic measures or institutional
arrangements that could prevent or minimize them. The third section discusses the role of
international organizations, especially the IMF, in preventing and resolving these crises.

The paper argues that in controlling public prices government gets into a trap:
this control does not reduce inflation as expect in the first moment and activates factors
that will increase it later on. The analysis is developed for government administered prices
in the area of energy and employs an input-output model that takes into account the direct
and indirect impacts of price changes. When public prices are reduced, the impact on the
inflation is small; but, since this create financial difficulties for the public companies, they
will either demand government resources and/or price appreciation later on. These will act
through price expectations to increase inflation more than proportionally in the future.

The Real Plan of stabilization was divided into three phases. The first phase concerned problems of fiscal nature: the governmental deficit. The second one, performed from March to June of 1994, purposed to balance relative prices and remuneration. The third step would knock down the inflation. The article’s aim is to discuss if the device introduced in the second step of the Plan, the Unidade Real de Valor (URV), carried out the goal of aiding the Brazilian economy in the discovery of a balanced vector of relative prices. One carries to the conclusion that the URV did not play its role properly and that the Plan, despite this problem, was successful in the initial period of the third step due to other motives — also discussed in the text.

In this article we investigate the theoretical shortcomings of traditional
neoclassical growth models and how the new literature of endogenous growth has emerged
to overcome these shortcomings. We study the theoretical reasons for hypothesis in the
traditional models – some of them necessary for the existence of equilibrium – that implied
counter-factual empirical results, like convergence. We will investigate how these hypotheses
were relaxed or substituted, up to a point where the new literature ends up working with
increasing returns and monopolist competition models of Schumpeterian inspiration that
deliver sustained growth and creative destruction.

The Walrasian approach in the neoclassical theory aims to explain a general
and stable equilibrium over time which is determined by the maximizing behaviour of
agents in the marketplace. This paper intends to highlight the main logical shortcomings
inherent to the General Equilibrium Theory, which have important implications at the
research level. In this context, the main issues become: i) at the level of assumptions, the
issue of stability introduces a fundamental indetermination in the model; ii) the well-known
market imperfections in the real world contribute to the impossibility of setting general
principles. The search to address the issues through a more realistic approach generates new
indeterminations and makes it even more difficult to attain the Pareto Optimum. In order
to better understand the logical and methodological impossibilities of this theory, the article suggests referring the research program to the rational constructivist philosophy of modem
times.

In this work, it is shown that Brazil has already entered the past century behind
the developed countries. The three main views to explain this fact are reviewed and a fourth,
based on recent theoretical developments, is presented. This view explains the backwardness
of the Brazilian economy due to the composition of its social classes, their historical roots
and their interrelations.

The objective of this essay is to analyze the demand for M4 and the capital flows in Mexico for the period 1978-1990. The econometric analysis heavily uses the general to specific methodology, cointegration and an error correction model. The empirical evidence shows the existence of a stable demand for M4. The demand for M4 depends, in the long run, on income and interest rate. In the short run the changes in the inflation rate and the currency substitution effect are relevant factors to explain M4. The presence of currency substitution implies that the authorities must take account of the differentials in the interest rates between Mexico and the United States.