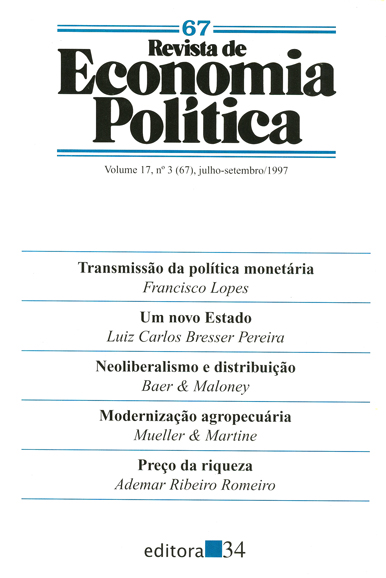 The transmission mechanism of monetary policy in a stabilizing economy: notes on the case of Brazil
Francisco Lopes
Brazilian Journal of Political Economy
https://doi.org/10.1590/0101-31571997-1049
View Article

This note presents some considerations about the difficulty to understand the
transmission mechanism of monetary policy. This difficulty becomes even more accentuate
in case of economies experiencing a change in an environment from high to low rates of
inflation, with an analysis to the Brazilian case.

Behavior of the monetary base and its conditioning factors in Brazil between January 1992 and March 1996
Robert Wayne Samohyl, Roberto Meurer
Brazilian Journal of Political Economy
https://doi.org/10.1590/0101-31571997-0939
View Article

This paper studies the behavior of the monetary base and its proximate determinants
in Brazil between January of 1992 and March of 1996. To achieve this, the paper
analyzes monthly variations of the base, using correlation coefficients and the relative participation
of each determinant on total variation. The analysis demonstrates that there are
several specific differences before and after the Real Plan in the profile of the determinants.
However, the analysis also shows that in both periods one of the major determinants of the
monetary base is the net flow of foreign exchange to Brazil.

One of the major reforms the Cardoso administration is committed is the administrative.
The basic proposal is to change Brazilian public administration from a bureaucratic
administration to a managerial one. The emergence, in the nineteenth century, of a
bureaucratic public administration replacing the patrimonialist forms of administering the
state represented a great progress. But it did not make sense anymore when the state had
added to its role providing public education, public health, public culture, social security,
science and technology incentives, infrastructure investments, environment protection. The
managerial public administration emerged as an answer to the crisis of the state, as a form
of coping with the fiscal crisis, as a strategy of making the administration of the huge services
the state took on less expensive and more efficient, as well as a device to protect the
public patrimony against rent-seeking or sheer corruption. The new public administration is
outcome and citizen oriented; it assumes that politicians and civil servants are entitled to a
limited degree of trust; it uses as strategy decentralization and the incentive to creativity and
innovation; it controls public managers through the device of management contracts.

This paper reviews the principal neo-liberal policy measures instituted in Latin
America in the last decade and their impact on equity. It first emphasizes the difficulty of
separating the impact of liberalization measures from the necessary fiscal adjustments of the
1980s, and their transitional vs long run effects, and then places the observed movements in
distribution in global and historical context. The second part places several innovations of
neo-liberal regimes in historical perspective and argues that their overall impact is unlikely
to be regressive, and that previous regimes were probably not especially progressive. Over
the long run, developments in factor markets are likely to be of overriding importance – the
demand side, driven by reoriented industrial growth and the increasing importance of the
service sector, interacting with the relative supplies of skilled and unskilled labor – are likely
to be of overriding importance in determining the evolution of the distribution of income.

Part of the analysis of contemporary change, “Fordism” lends its name to a set
of challenging, essential, and controversial debates over the nature of 20th century capitalism.
By highlighting its ambiguities, this short article aims to outline the heuristic value of
“Fordism” as a theoretical concept.

This paper discusses regulation of infra structure sectors, especially in the case of
grid industries. The main modes of regulation and the most frequent organizational models
applied to this kind of industry are presented. Adopting the natural gas industry as a basic
reference framework, an analysis is drawn to emphasize the role of open access to increase
competitiveness of grid industries. Some aspects discussed in the paper are highlighted using
the British gas industry privatization as an example.

The paper examines the effects of the significant changes in Brazil’s agricultural
policy during the 1980s, on the ability of its modem agricultural areas to generate jobs
and to retain rural population. This was done by identifying large zones of rapid agricultural
expansion and modernization, and observing the changes in the decade, in agricultural
employment and in rural population. It was possible to establish that the areas of modem
agriculture in the country’s Center-South region, and in the savannas (“cerrados”) of the
Center-West, either generated very little employment, or experimented declines in agricultural manpower. Moreover, the rural population of all these areas experimented reductions. In
the Center-South the declines were quite substantial but even in the “cerrados” there were
significant reductions. Therefore, to the contrary of what one might expect from the changes
in agricultural policy brought about by the crises of the 1980s, Brazil’s agriculture continued
to expel rural manpower and population. However, in the period this expulsion was more
selective, being restricted mainly to de dynamic agricultural areas. In the rest of the country,
to the contrary of what took place in the 1970s, rural emigration was either small, or there
was retention of population. In fact, this contrasting pattern of migration made it possible
an overall abatement in Brazil’s rural migration in the 1980s.

This paper discusses the statement that the Keynesian Theory would be “a particular
case of the Classical Theory with rigid wages”. It examines whether Keynesian analysis
depends on the rigidity hypothesis and to what extent the referred hypothesis has actually
been used in The General Theory. The Neoclassical Labor Market is criticized. The Keynesian
Theory of Employment, the Pigou’s Reply and the Neoclassical Synthesis are also examined.
The analysis of the method applied in the General Theory of Employment, Interest
and Money – a static method of a dynamic process – leads to the conclusion that its ideas
represented a complete revolution on the economic thought prevailing before its publication.

This article asks: “When and why do state governments oppose (or support)
privatization programs initiated by the central government?” We examined national privatization
initiatives in the 1990s in India and Brazil in the areas of electricity and banking and
the different responses from state governments in each of the largest financial and industrial
centers in their countries, the states of Maharastra and São Paulo. Possible explanations
for states’ opposition to federal government initiatives such as Enron and Banespa include:
(1) ideological commitments by state leaders, (2) political or political coalition differences
between state and federal governments, and (3) an uneven distribution of costs and benefits from privatization between the state and federal governments. This article suggests that explanation
(3), conflict of interest, is the best explanation, although the nature of political
alliances (2) and political values may have an influence. This article concludes that seemingly
irreconcilable political spheres can often be improved and some distribution of benefits can
make the package more attractive to state leaders.

The paper reviews the work of E. Altvater dealing with the challenges of the
environmental depletion to humankind survival. It shows the logic of its analytical structure,
built to demonstrate its central thesis: growing environmental problems are inherent to capitalism
development, leading to a sharp division between a small number of countries with
high levels of natural resources consumption and the others, poor ones, destined to play a
role as natural resources reserves for the former. The paper argues about the validity of the
hypothesis of this analytical model. It assumes as true only the first one, on the impossibility
to diffuse all over the world the Euro-American production and consumption patterns without
causing an environmental disaster. The other ones are viewed either as lacking empirical
evidence or more solid arguments.