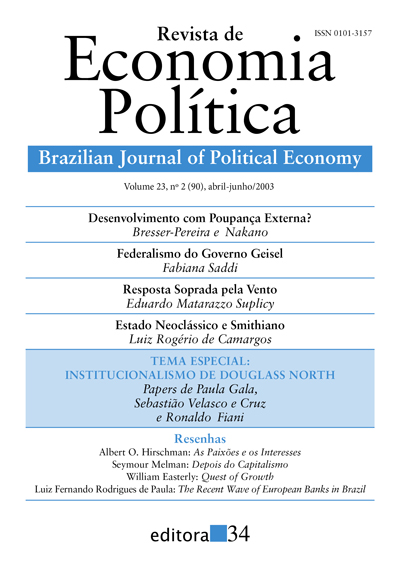 Highly indebted countries, particularly the Latin American ones, presented dismal economic outcomes in the 1990s’ which are the consequence of the “growth cum foreign savings strategy”, or the Second Washington Consensus. Coupled with liber- alization of international financial flows, such strategy, which did not make part of the first consensus, led the countries, in the wave of a new world wide capital flow cycle, to high current account deficits and increase in foreign debt, ignoring the sol- vency constraint and the debt threshold. In practical terms it involved overvalued currencies (low exchange rates) and high interest rates; in policy terms, the attempt to control de budget deficit while the current account deficit was ignored. The paradoxical consequence was the adoption by highly indebted countries of “exchange rate populism”, a less obvious but more dangerous form of economic populism.

The aim of this work is to study the political dynamic of the reconstruction of federalism in Brazil during the Geisel Government, in the very beginning of the Brazilian transition to democracy. This analysis will begin in November 1974, when the results of the election moved the federal government to start using the economic and political relations of federalism to conduct and control two complementary projects: the controlled political liberalization and the Second Brazilian Plan for Development.

In a lecture on the development of the idea of an Unconditional Basic Income, issued on August 17, 2002, at the University of São Paulo, Professor Phillipe Van Parijs stated that the introduction of such a program in continental countries as Brazil should be made gradually.

This paper is concerned with collective benefits arisen from operation of a market-based economy, contrasting traditional Neoclassical explanation with Adam Smith approach in The Wealth of Nations. Its aim is to examine, in both thoughts, the explanatory limits and the meaning of why a beneficent social outcome emerged from a market-based economy.

The paper briefly presents Pierre Rosanvallon’s analysis of the Welfare State Crisis in order to shed some light to the present debate about the Brazilian Social Security Reform. In special the concept of justice and the social cohesion embedded in some measures proposed to bring long term financial equilibrium to the system are discussed.

This paper aims to review the institutional theory of Douglass North. After a brief introduction and some comments related to his method, it sums up the theoretical core that proposes from the analysis of three of his main works on the subject.

In his book Institutions, Institutional Change and Economic Performance North explicitly sets out the task of formulating a systematic theory of institutional change. In doing so, he abandons some of the neoclassical assumptions that had so far been informing his work, which makes it possible for him to turn into genuine research problems a series of phenomena formerly regarded as simple anomalies, which, though acknowledged, still held. as elements exogenous to the model. By inserting the author’s argument in the line of reflection woven by him over time, the aim of the article is to present it faithfully and to criticize it, highlighting the difficulties that arise from it when we ask questions about the conflicts that accompany and drive the historical processes of institutional change. It is, therefore, a theoretical-methodological article that communicates two neighboring disciplines (Econom-ics and Political Science) and two strands of the New Institutionalism (shareholder and historical).

This paper analyses the rhetoric of Douglass North. After a brief discussion about the relevance of rhetorical studies for methodological purposes, we investigate the author’s speech in Institutions, Institutional Change and Economic Performance (1990) in two stages. The first deals with the way in which North delivers his theory — the main focus here is in the way he “talks” to his audience. The second shows the author’s use of some of the classical rhetorical rules as proposed by Arida (1983). In the last section we discuss some aspects of North’s work considering other studies with the same task in Brazil.

Douglass North’s ideas, notwithstanding his 1993’s Nobel award are still barely known among Brazilian economists. This unawareness is deplorable not only because the relevance of his ideas to current development theory but also for his new (and rather heterodox) contribution to the analysis of the modern State’s economic role. This paper presents a synthesis of North’s discussion concerning the institutional role of the State in the economic system. It is shown that in North’s thought that role comprehends not only the enforcement of property rights but more importantly the definition and attribution of those rights.