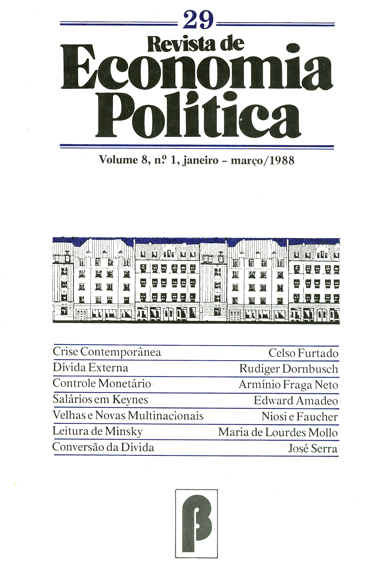 An economic system isn’t a simple constellation of markets whose logic can be explained by the behavior of individual agents theory. It presupposes the existence of a institutional framework and a regulator power capable of arbitrating the conflicts which always manifest about the appro-priation and allocation of scarce riches. According to the author, the mechanisms of regulations are today seriously prejudiced as a consequence of the new conformation that the capitalist econo-mies have been assuming. In order to resolve the contemporary economic crisis, new forms of political organization will need to be invented to conciliate the aspiration ons preservation of the cultural identity with the exigencies of the modern technology and the emersion of transnational power. However, bringing forward on this way should not deprive the auto-regulator capacity of those countries for which the internal structure’s modernization is a priority.

This paper deals with the U.S. interest in the world debt problem. According to the author, the debt problem (1) affects the profitability and even the stability of thc U.S. banking system; (2) is a part of the U.S. trade crisis, and (3) is a major foreign policy stake iii the debt crisis in that debt collection brings about social and political instability. The author shows the debt facts and the ori-gins of thc debts problem analyzing the major problem debtors. In the general framework named as “transfer problem” is discussed the problem of debt service where the author presents a case study of Mexico and Brazil. He concludes showing five alternative solutions to the debt problem: an improved world macro-economy, a facility, debt-equity swaps, a reversal of capital flight, and Bradlly-style debt relief.

This paper analyzes the relative roles of wage policy and economic conditions in wage determi-nation for production workers between 1960 and 1976 in five manufacturing industries in São Paulo, Brazil. Analysis of three sub-periods considers the direction of the influence of wage policy on real wages, the observed changes in real wages, and “wage drift” relative to a predicted wage index based on wage policy. Results indicate that the impact of the repressive wage policies during the 1965-67 and 1973 “wage-squeeze” periods varied by size of firm and ownership and with gene-ral economic conditions.

The control of monetary aggregates in Brazil has to face three large problems: 1) high govern-ment budget deficit, 2) the ineffectiveness of the interest rate as a policy instrument in a highinflation environment; 3) unpredictable financial innovation. The first two problems are especially important when one is trying to design stabilization programs. After inflation reaches a certain le-vel, standard monetary policies become, powerless. Control of the budget deficit (i.e. a limitation on the use of the inflation tax) becomes necessary condition for stabilization.

The paper analyses different aspects of the role of wages in Keynesian Economics. It argues that a reduction in money-wages — a policy prescription to fight unemployment usually found in orthodox analysis — may have a negative effect on the level of activity. Also, it argues that the conventional view of keynesian macroeconomics (based on the rigidity of wages) misinterprets Keynes s own views in the General Theory. In the book Keynes points out that wide fluctuations of wages are not desirable since they would lend instability to the economic system.

Present theories on multinational corporations (MNCs) and technology transfer have achieved several major breakthroughs. They are schematically summarized in this work as the “established theoretical synthesis”, resulting from the contribution of three major theoretical currents: the product cycle, the industrial organization and the theory of foreign direct investment based on comparative advantages. This paper challenges the assumptions of this synthesis: according to the author it is but a raw conceptual mix of theoretical generalizations based only on the manufacturing sector of American and British MNCs. As an alternative, the author compares that synthesis with evidence coming from one of the most active sectors in the North-South technology transfer: the energy industry. The comparison will allow to shed some light on the limits of the theoretical model when applied to a non-manufacturing industry, and to the relationship between developing and developed countries.

This paper is a study of the idea of inherent instability of capitalism in Minsky’s conception. We begin by describing how Minsky connect the idea of financial fragility and instability with the instability of capitalism. Then we analyze two important features of Minsky’s explanation of the economy’s inherent tendency toward financial fragility and crises. The first is the subjective behavior of the economic agents, given the uncertainty in the economic world. The second is the role of banks and monetary authorities when the money supply is considered, as here, endogenous.