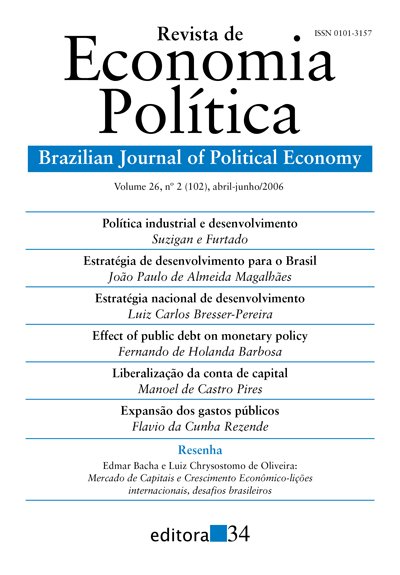 This paper aims at contributing to the debate on industrial policy and economic development in Brazil. At first, theoretical approaches that support industrial policy- making are discussed, with emphasis on the neoschumpeterian/evolutionary approach, which focuses on innovation as prime mover of economic development and on the co-evolution of technologies, institutions, and industries and firms structures. Next, such an approach is applied to explain some successful experiences of industrial policy-making and economic development in Brazil up to the end of the 1970s, and the failures to implement such a policy from the 1980s onwards. Finally, the present government industrial policy is evaluated, arguing that although it has some positive aspects like the focus on innovation, clearly defined targets and a new institutional organization, it fails as an economic development policy because of weaknesses such as incompatibility with macroeconomic policy, inconsistencies of policy instruments, deficiencies in infrastructure and in the science, technology and innovation system, and lack of coordination and political drive.

The foremost aim of the article is to propose a new development strategy for Brazil, replacing the neoliberal model presently used. In short, the point is to recover a long term vision of the economic policies. And for that it is indispensable to take into consideration the recent evolution of the Development Economics which considers the existence of market, instead of the availability of savings, as the main condition in economic development policies. The acceptance of the market as the basic condition for successful development policies has as one of its consequences the unacceptability of the process of globalization with its present characteristics.

After a review of the concept of economic growth as a historical process beginning with the capitalist revolution and the formation of the modern national states, the author claims that growth is almost invariably the outcome of a national development strategy. Effective economic development occurs historically when the different social classes are able to cooperate and formulate an effective strategy to promote growth and face international competition. It follows a discussion of the main characteristics and of the basic tensions that such strategies face in the central countries which first developed, and in the underdeveloped countries, which, besides their domestic problems, confront major challenges in their relations with the rich countries.

This paper attempts to explain why the Brazilian inter-bank interest rate is so high compared with rates practiced by other emerging economies. The interplay between the markets for bank reserves and government securities feeds into the inter-bank rate the risk premium of the Brazilian public debt.

This paper analyzes the growth of the firm by foreign trade. The theory of Adrian Wood is revisited for the analysis of growth and profit trade-off and improved to cope with growth by exports. The main outcome of this paper is that low domestic demand can be a very important factor to firm choices growth by foreign market. However, the growth of domestic demand does not necessarily reduce exports.

This paper makes a critical survey of some recent evolutionary economic literature dealing with industrial dynamics. Although the evolutionary models of industrial dynamics has explored the relationships among market structure and the innovation process within an analytical context that emphasize non-linearity, behavioral asymmetries and the existence of ive process in the competitive dynamics of markets, have been capable of offering compatible results with industrial organization stylized facts, a lot of limitations in technical change description pointed out have able to alter in a crucial way the results attained.