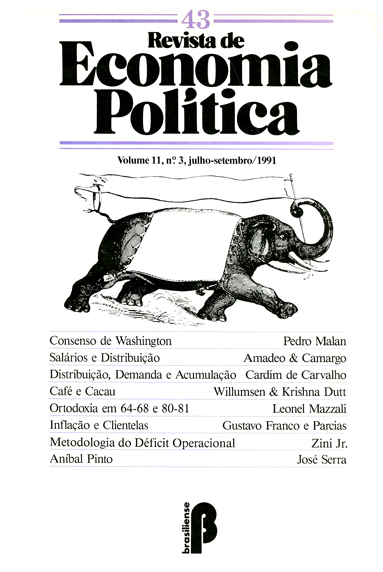 This was the intervention of the author at the closing Panel of a Conference in Honor of Albert Hirschman on Development Strategies for Latin America. It draws attention to some shortcomings of the so-called “Washington Consensus”, John Williamson’s apt expression to describe the view that better policies lead to better results, worse policies to worse results. This is true but trite, trivial and tautological. The author suggests that there are three types of policies to be addressed: the first is related to the quest for macroeconomic stability; the second to much-needed microeconomic reforms; the third is the missing link in the Washington Consensus and has to do with the resumption of growth and investment with technological change in an increasingly competitive world economy. This requires, in addition to macro-stability and micro-reforms, some visions of the future and a much more effective pattern of interactions between the private/sector and a modernized and active public sector, given the in-terdependence of investment çlecisions in the presence of economy-wide externalities.

This paper examines the effects of the segmentation of the labour and goods markets over the dispersion of relative prices and wages in the Brazilian economy. The theoretical argu-ment is based on the behaviour of firms in the oligopolist and competitive sectors of the econ-omy, on one hand, and the behaviour of organized and non-organized labour, on the other. We suggest that the negotiations between oligopolist firms and organized labour can be seen as a positive-sum game; whereas a zero-sum game characterizes the distribution or income in the economy as a whole. Hence we conclude that there has been a redistribution of income in favour of profits and wages of those agents operating in the oligopolist sectors in detriment of the other agents in the economy.

The paper presents a survey of the main theoretical schools approaching the determina-tion of income distribution profiles. This question has been the core of economic theory since its birth, with Adam Smith. Classical Political Economy had its focus on the relations between functional income distribution and the development process, proposing that growth could be promoted by an increase in the profit share of national income. Neoclassical economics main-tained the focus on functional distribution, relating it, however, to a notion of relative scarcity of factors of production. Keynes’s General Theory changed the emphasis to personal distribu-tion that would be related to the formation of the various elements of aggregate demand. Post Keynesian studies tried to relate Keynes’ s views to classical insights on income distribution. The paper ends with a brief examination of some studies on Brazilian income distribution pro files.

This paper analyzes the impacts of increases in prices of two primary products — coffee and cocoa — on the growth of the national and regional economies. It tries to understand the factors that have determined salutary effects in the coffee region and negligible effects on the cocoa region. The results suggest that only a partial answer can be found in the nature of these products, as proposed by the “staples” approach. The largest effects seem to be connect-ed with some social and macroeconomic characteristics

The perverse effects associated to orthodox stabilization programmes, specially persist-ent inflation accompanied by a prolonged period of recession with unemployment, attract the attention on the evaluation of consistency between the orthodox approach and the economic situation which characterize the crisis. Then, the comparative study of two economic stabiliza-tion policies in Brazil, in the sixties and eighties — PAEG (1964-1968) and Stabilization Pro-gram (1980-1984) — gives opportunity to develop an analysis of the incoherencies in orthodox view about the roots of inflation and balance of payments disiquilibria.