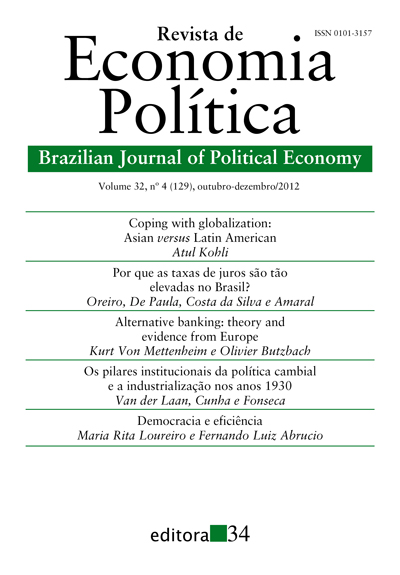 When compared to Latin America, Asian economies since 1980 have grown faster and have done so with relatively modest inequalities. Why? A comparison of Asia and Latin America underlines the superiority of the nationalist capitalist model of development, which has often been pursued more explicitly in Asia, over that of a dependent capitalist model, which has often been pursued in Latin America. In comparison to Latin America, the Asian model has facilitated higher and less volatile rates of economic growth and a greater political room to pursue social democratic policies. The “tap root” of these alternate pathways is relative autonomy from global constraints: states and economies in Asia have been more nationalist and autonomous than in Latin America.

Since financial liberalization in the 1980s, non-profit maximizing, stakeholder-oriented banks have outperformed private banks in Europe. This article draws on empirical research, banking theory and theories of the firm to explain this apparent anomaly for neo-liberal policy and contemporary market-based banking theory. The realization of competitive advantages by alternative banks (savings banks, cooperative banks and development banks) has significant implications for conceptions of bank change, regulation and political economy.

The 1930s constitute one milestone in the Brazilian economic development, as the accelerated industrialization process has started and became the dominant domestic policy. This paper reviews this period focusing on the institutional changes restructuring exchange transactions, to curb financial flows and balance external payments.

Many economists see politics as an irrational activity. They also think state action usually generates market inefficiencies and democratic institutions, such as elections, often work as obstacles to sound economic measures. Showing that vision has been embedded into the main currents of economic thought since the last century, we also argue those ideas are exported to great part of contemporary political science, including the area of public policies. Examining the literature, we show that rational choice political scientists, as the economists, claim governability and effective decisions will be guaranteed mainly through concentrated arenas or through insulated arrangements able to protect policy makers from political interference. In other words, governability depends on the reduction of the political arenas. On the contrary, we reject this technocratic solution of splitting politics from economy. With the support of classical pluralist thinkers, we stand another conception, arguing politics is the privileged social space for building interests and values in an institutionalized way. The difficulties to surpass current international crises since 2008 reveal this is a crucial problem: reducing politics would prevent societies from improving institutional solutions which are the only ones able to give space to emerging conflicts and, then, reach eventual consensus around them.

JEL Classification: A1; B0.

This paper investigates exchange rate pass-through inflation, and the wage bargaining process, in a developing economy in which firms’ market power is largely dependent on technical progress embodied in imported intermediates and capital goods. It develops a heterodox model of income distribution, based on theoretical contributions from Latin American structuralists, labor market segmentationists and post-Keynesian writers, and it presents supportive empirical evidence from the Mexican economy.

This paper presents a methodology for calculating the industrial equilibrium exchange rate, which is defined as the one enabling exporters of state-of-the-art manufactured goods to be competitive abroad. The first section highlights the causes and problems of overvalued exchange rates, particularly the Dutch disease issue, which is neutralized when the exchange rate strikes the industrial equilibrium level. This level is defined by the ratio between the unit labor cost in the country under consideration and in competing countries. Finally, the evolution of this exchange rate in the Brazilian economy is estimated.

The purpose of this article is to present the process of (late) internationalization of Spanish companies occurred between the years of 1990 and 2000, its determinants and the degree of involvement of the State in this process. We can point out some determinants in this process, such as: a fall in the profitability of the domestic market, a shrinking of the Spanish market, imminent danger of the acquisition of Spanish companies in the local market due to trade and financial openness. We conclude that this process was not fortuitous. There was a clear perception by the government that this process would not only be relevant but also necessary for the entrance of Spain in the international economic and geo-political set.

The adequade way of neutralizing the Dutch disease is the imposition of a variable tax on the export of the commodity that originates the disease. If such tax is equivalent to the "size" of the Dutch disease, it will shifts to the right its supply curve of the commodity in relation to the exchange rate, giving the existing domestic sypply and the international demand, the exchange rate will depreciate at the value of the tax, and the quiligrium exchange rate will move from the "current" to the "industrial" equilibrium.