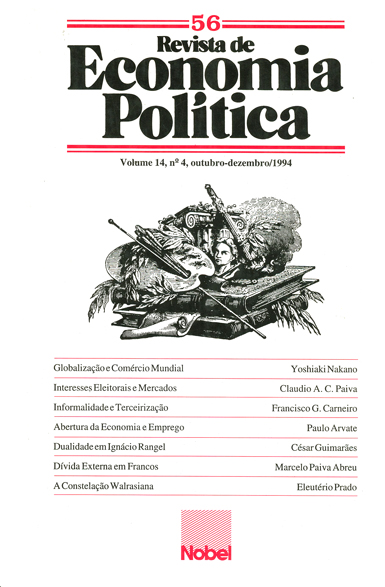 With the trade liberalization reform of 1990 Brazilian industry started a deep process of restructuring to increase its integration with the word economy. So it is important to understand the forces operating in information technology revolution and globalization as two most important forces driving the transformation in the word market, defining a new competitive advantage.

This paper builds on the theory of regulation developed by Stigler and Peltzman. According to these authors, a regulator chooses his/her strategy seeking to maximize political support from consumers and producers, viewing welfare and efficiency as secondary issues. This process determines a regulated price that is between the competitive and monopolistic levels. Our paper develops a modified version of Peltzman’s model by considering the idea that the regulator’s behavior might change with the proximity of elections. The addition of a timing dimension to the problem and its implication for consumers, producers and the regulator’s behavior suggest that the optimal strategy now implies in a price cycle in regulated industries. The regulator has incentives to impose higher prices when elections are relatively far ahead and lower (real) prices in periods that immediately precede an important election. We show that the Brazilian gasoline market between 1969-1984 supports our results.

The article discusses some issues concerned with the idea of flexibility in the labor market. Firstly, it presents different approaches on the existence of an informal sector in the economy and distinguishes the modem process of tertiarization, observed in industrialized countries, from the growth of tertiary activities found in most developing countries. Secondly, a brief discussion on the recent juncture of the Brazilian labor market is presented. The conclusion is that a higher degree of flexibility in the Brazilian labor market has been searched throughout the informalization of legal activities and also by an incipient process of modem tertiarization.

The purpose of this paper is to demonstrate under which circumstances a policy designed to open the economy may not succeed in changing employment level. This kind of circumstances happens because in this model it is considered both internal and external dynamics to a correct arbitrage of real exchange rate.

Brazilians dub the eighties “the lost decade”. After forty years of an average annual growth of 7%, the GDP per inhabitant ped 5% in that decade. Ignacio Rangel, a Marxist economist, foresaw the coming of the crisis in 1978, and suggested the only way out: the privatization of the public utilities. That was before Reagan and Thatcher. The “Brazilian Duality” is the mainspring of Rangel’s thought. According to it, the national economy must be analyzed from both its “internal side”, i. e., the national economy itself, and its “external side”, the world economy.

Although the share of the debt in French francs in total Brazilian debt was of only 6% in 1930, the analysis is of interest due to the marked concentration of inflows just before World War I, to the concentration of indebtedness in high risk loans to states and municipalities and to the fact that France was the only creditor country to return to gold with a broken parity. The process of Brazilian progressive indebtedness in francs is described and the performance of loans in different currencies is evaluated in relation to alternatives such as the purchase of government bonds.