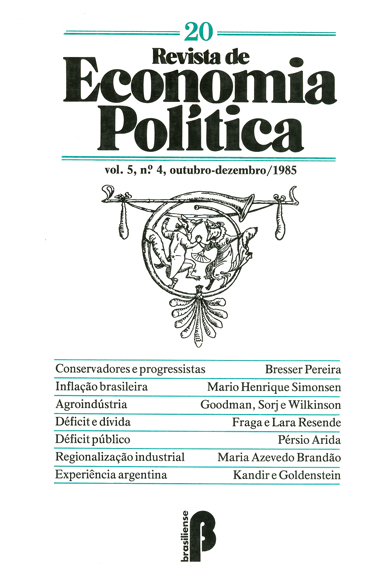 This article presents a review of current literature and debates on Brazilian agriculture, identifying three basic approaches — the articulation view, the classical proletarianisation inter-pretation and analyses which take as their starting point the concept of the agroindustrial complex. There follows the outlines of a general critique of each approach together with an alternative framework for analyzing rural structures. In the final section an attempt is made to synthesize the principal tendencies restructuring Brazilian agriculture both regionally and in terms of a typology of the principal forms of production.

This article develops the idea that the three basic theories of inflation (the monetary, the fiscal and the inertial) complement one another. This interpretation brings about two important policy issues: first, the necessity of done coordination between fiscal and monetary policy; and second, the necessity of the synchronization of antiinflationary measures on demand and cost side to break up the link between the present and past inflation due to the indexation. These question are developed in the context of Brazilian institutional homework, of multiplicity of budgets, formal indexation and a peculiar monetary system. Finally, alternative policies are critically evaluated.

From the assumption that Economics or Political Economy is a science ideologically conditio-ned, the author distinguishes a conservative from a progressist or liberal approach. This distinc-tion is made in three levels: 1) basic theory, more specifically value theory; 2) macroeconomic theory; 3) economic policy.

Modern industrialization in the Brazilian periphery had its pre-conditions established in Bahia in the 1950’s (the Paulo Afonso hydro-electric plant on the São Francisco River, the extraction and refinement of oil near the state capital — Salvador, and highway connections with the Brazilian Center-South). The State, therefore, assumed relatively early an active role on the regional level. Meanwhile, the resulting flow of money in Salvador accentuated the traditional importance of commerce and banking, reinforced since the seventies by major public works and the building of a petrochemical complex. In Pernambuco, in contrast, the “new industry” promoted by recent governmental incentives has found an old industrial experience and produced a more diversified and less capital-intensivo activity. As a result, Recife presents maybe a more pluralistic structure, but lower levels of income and consumption than Salvador. The article calls attention to the importance of the banking sector in Bahia, which Is behind the failure of early industrialization, while contemporarily it is critical in the region’s articulation with supra-regional processes.

A simple model is developed to deal with the financial dimension of the public and its relation to the external adjustment. The effects of an exchange devaluation, of a casing of thc external restriction and the role of fiscal policy under a wealth-effect intense enough are discussed. Finally, a comment on the determinants of the rate of interest and its intertemporal aspects.