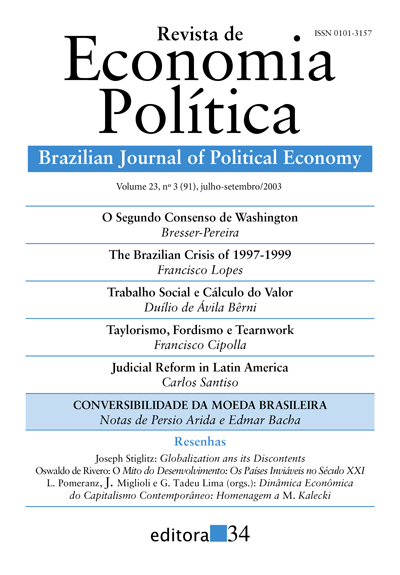 While in the social and ethical realms the Cardoso administration (1995-2002) was successful, its economic outcomes were frustrating. In these eight years the in- vestment rate did not increase and income per capita growth lagged, while public and foreign debts increased substantially. This poor economic performance may be explained by three chained causes: a mistake in agenda setting, the adoption of the Second Washington Consensus, and the alienation of elites. The decision of setting high inflation as the major problem to be tackled instead of achieving equilibrium in foreign accounts represented a major macroeconomic mistake, which can be explained by the Second Washington Consensus. This consensus proposed in the 1990s that highly indebted countries should grow counting on foreign savings, although this is not the experience among OECD countries. The outcome was to evaluate the real, to increase artificially wages and consumption, so that instead of growth we have been increasing indebtedness. Why this flopped strategy was adopted? Rich countries’ interests are not difficult to guess. On the part of Brazil, the only explanation is Brazilian elites’ alienation in relation to the country’s national interest. As a final outcome, the Cardoso administration ends with another balance of payments crisis.

This paper deals with the Brazilian crisis of 1997-98 that lead to the exchange rate floating of January 1999. It starts by showing how exchange rate policy evolved since the Real Plan of 1994 and how the exchange rate regime became a critical issue when the crisis started in 1997. It discusses monetary policy during the crisis, the IMF program, the endogenous diagonal band and the decision to float as an alternative to capital controls and default. This five-year drama ended surprisingly well with a benign float, but it is useful to know its details, with the usual mix of economic de- bate, personality clashes and historical fatality.

The study of added value and its three calculation forms is usually taken independently from the three dimensions of social labour, where it comes from. The aim of this paper is to bridge the gaps which start from the appraisal and classification of the different dimensions assumed by social labour, its three circuits of measurement and the transition between labour value and added value. Its main concern is to attempt to clarify these relations, as well as to serve as an instrument to continue the discussion of the research programme associated with the value theory.

The growth of teamwork as a form of organization of the labor process, which, to a certain degree, does away with bureaucratic forms of control over labor, has been interpreted by authors such as Adler (1998) as part of a tendency towards the socialization of production. The present paper develops an alternative conclusion: team- work as interpreted here has been effective from capital’s point of view precisely because it makes control over workers to spring from the workers themselves.

The paper focuses on the financial and currency crises that took place in the Latin American financial globalization context. It is presented in four sections. A synthetic view of the financial globalization process and the role played by LA is presented in the first section. The second section presents a model encompassing the eighties’ and nineties’ crises. The position assumed by the IMF is discussed. The third section examines other national financial globalization processes that did not lead to crisis. The “crisis prevention measures”, largely based on that experiences, are then commented. Lastly, the fourth section discusses the national paths leading to “segmented financial integration” and presents some reflections about international coordination problems.

While there exists a consensus on the centrality of the rule of law both for economic development and democratic consolidation, the political economy of legal and judicial reform remains largely under-theorized. The review essay underscores the tensions and trade-offs between the different strategies and objectives of judicial reform in Latin America. Contrasting the experiences of Argentina and Brazil, it high- lights the delicate balance between independence and accountability. It also assesses the role of donor institutions, and in particular the multilateral development banks, in promoting judicial reform. It argues for a more realistic approach to judicial governance, focusing on feasible reforms.

The UN/ECLA 1949 Manifesto centered on inflation and balance of payments as critical issues on Latin America’s development. Fifty years afterwards, Latin America succeeded both conceptually and in practice to overcome the high inflation syndrome. Not so the external strangulation, which is still very much present in the region. After reviewing recent conceptual advances in understanding the “dollar constraint” problem, the paper discusses Persio Arida’s proposal for a fully convertible floating currency as a means of building a domestic long-term financial market.

The paper argues that the monetary reform undertaken in 1984 is to be completed by rendering the real fully convertible into other currencies. In present status quo the real is convertible under some circumstances and for some agents while Central Bank may suspend convertibility or alter its rules by administrative decree. As a consequence, there is a convertibility risk premium that leads to either higher domestic interest rates or a more depreciated domestic currency or both. The process of liberalization of capital movements should be pre-announced and implemented in steps. The regime of free convertibility is not a panacea but an important instrument in restoring credibility of the monetary standard.