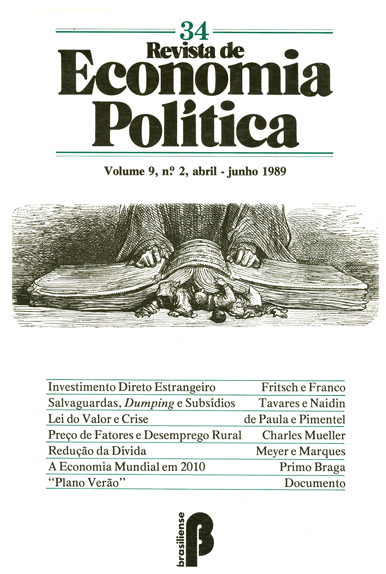 The paper discusses the normative principles on which Brazilian policies towards foreign direct investment should be bared. It starts from considerations about global trends regarding world industrialization and trade — especially as connected with new technological developments — and seeks to identify some crucial elements in the relationship between Brazil and the world economy to be shopped by multi-national corporations. Next the paper deals with issues related to market access and technological transfer emphasizing the importance of foreign firms for the future of Brazilian industrialization and exports performance.

This paper argues that the establishment of a safeguards code is one of the basic issues to be faced by the present Gatt round of negotiations. Section II discusses the role of safeguards measures as instruments of protection, shows the problems that arise from the lack of a code on such matter, and indicates the feasible options for regulation. Section III analyses the operation of the antidumping and subsidies codes during the eighties, with emphasis upon the impacts of the actions taken by other countries against Brazilian exports, and reveals the interplay of theses codes with other instruments of protection used by developed countries. Section IV summarizes the main points of the article.

This article firstly analyses the antikeynesian features of “IS-LM” model as developed by Hicks, as well as of the extensions of this model in the version of Pigou and Modigliani. In a second stage, it analyses the internal inconsistencies of the model, as pointed out by Hicks himself, when it fits together a flow relation which is expressed in the IS curve with a stock or balance sheet relation, as expressed by the LM curve.

This essay is about the present crisis of the institutions, structures and policies which made possible remarkable growth of the capitalist world economy for more than three decades following World War II. It deals with weakening of the dollar, instability of the international financial system, extreme indebtedness of countries, firms and governments and deterioration of institutions like the IMF and GATT. We maintain that the present predicament also involves a crisis of the general mechanisms of capitalist regulation, i.e. the law of value and its pseudo-substitutes, such as state intervention and oligopolistic administration. In sum, we argue that the crisis which capitalism faces at the present time is general — economic, political and institutional — and that it results from the same mechanisms which stimulated rapid growth in previous decades. In this sense, the present imbroglio is a kind of “auto-immune” response, or in other words, it is due to blockage of the sanitizing action of Schumpeter’s “creative destruction”.

It is widely known that in Brazil, agricultural growth and modernization are taking place together with a substantial “liberation” of the rural workforce. According to evaluations based on the neoclassical doctrine, this is due to a severe distortion of relative factor prices. Artificially cheap equipment and “expensive” labor have favored a large-scale substitution of the former for the latter. Thus, workers are being driven out of the farms at a faster rate than that allowed by the creation of jobs in the rest the economy. To correct this situation, it would be necessary to eliminate the factor price distortions. The paper argues that these evaluations are mistaken. They ignore the real nature of the process that led to the adoption of mechanical technologies and to a growing liberation” of manpower from rural areas; the phenomenon is considerably more complex than what is implied in the substitution of equipment for labor along an isoquant exhibiting substitutability. It argues, furthermore, that the substitution of machinery for labor would not be reversed by the mere adoption of a policy eliminating the “distortion” in factor prices.

From the viewpoint of developing countries the so-called conventional debt strategy is clearly unsatisfactory, mainly because it underestimates the dimension of the crisis and the domestic costs of the adjustment imposed on debtor countries. New private loans, which are anyway more and more difficult to obtain, wouldn’t be a solution, in the sense that they would increase a debt that is already extremely high. Some mechanisms to reduce the stock of the external debt have been introduced in recent rescheduling agreements with creditor banks, such as debt-equity swaps, buybacks and the exchange of part of the debt for long-term bonds. However, for many countries, these market instruments will not provide a sufficiently large reduction of the burden of financial foreign transfers. Therefore, it is necessary to arrive at an encompassing and lasting solution to the external debt problem, through the design of an adequate institutional and legal environment that could provide more support and additional guarantees to the implementation of debt reduction schemes.

This paper analyses the impacts of ongoing technological innovations (parti-cularly, in microelectronics) on the future of the world economy. The author argues that service-intensive activities will become increasingly important and the worlds economy will reach “network characteristics”, with a much higher degree of inter-dependence than ever. The technical feasibility of worldwide integration, however, will not necessarily translate itself into economic integration given the resistance of nationalist and protectionist forces. And the disarray of the international financial system will tend to foster these forces. Against this background, the options for Brazil vis-à-vis the worldwide integration process are also discussed.