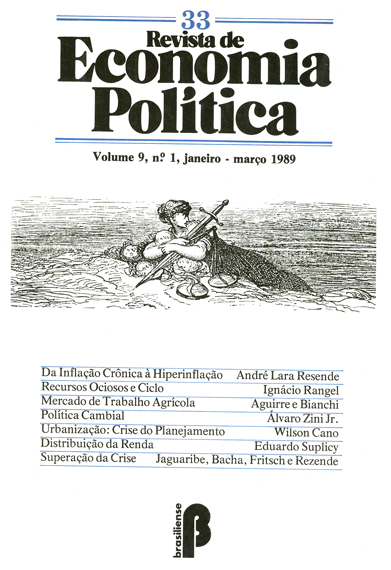 This article makes a classification of inflation processes. Moderate inflation is a phenomenon represented by Phillip’s Curve. In chronic inflation, inertial and back-ward looking indexation are major factors. Hyperinflation eliminates backward looking indexation and is dominated by expectation and the public factor financial difficulties. It is argued that although the public inflation factor deficit is not always the primary cause of chronic inflation, in later stages no government deficit what-soever can be financed. The lack of all sources of public factor financing is what characterizes the transition to hyperinflation. The current Brazilian scene is analyzed.

This article shows that the specific conditions for revolutionary changes in the Brazilian society are reaching maturity. The alliance of classes which commands the State cannot govern anymore because the social body does not want to be governed as it was before. The general violation of social order is a manifestation of this situation and have its origins in the contradiction between the latifundio and the industrialization which was characterized by large excess supply of labor. The current recessive phase of the business cycle is characterized both by the strong idle capacity in the heavy industry and the large bottleneck in the public services sector. The privatization of public services as well the reformulation of financial intermediation is the solution, which is coming out because the financial crisis of the State is the weak link of the economic system.

This article touches upon the subject of the organization of the rural labor market in Brazil in the past 30 years. It discusses the interplay between technical change, seasonal demand of labor and increase of the number of temporary workers. Temporary workers recruited through agents are compared to those directly engaged. The last part of the article covers a preliminary discussion on the conditions presented by temporary workers for collective bargaining.

Indicators for Brazil’s real exchange rate are calculated using different definitions and focusing on what happened to such indices during the Cruzado plan. The real effective exchange rate shows little appreciation in 1986 although the Cruzado/Dollar rate did appreciate. The result is troubling iii the light of a 25% decrease in Brazil’s trade surplus in 1986. The paper argues that the net trade balance is explained by three variables: the real effective exchange rate, domestic real income and real income in the rest of the world. An econometric exercise shows strong income effects, effects that are ignored by the policy of minidevaluations. The paper then looks at the suggestion of a dual exchange rate regime for Brazil and concludes that such a system is likely to bring more instability to the economy. An alterna-tive proposal of a planning approach” to the exchange rate policy is delineated.

This article discusses the urbanization process in São Paulo State in the period of 1930-1980. It presents the origin of the reproduction, in the interland of São Paulo, of the accelerated urbanization, the industrial “decentralization”, and the exacerbation of the social problem. It also suggests alternative policies for the urban problem.