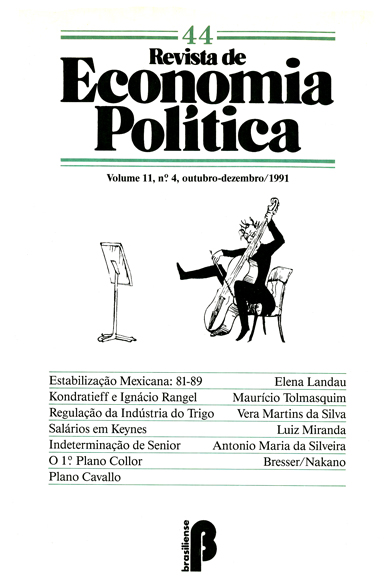 The paper analyses economic policy measures related to the 1982-89 Mexican stabiliza-tion plan. It shows that the first phase was predominantly orthodox. In a second step, a dein-dexation policy was followed, which kept prices and wages virtually constant during approxi-mately two years. The results so far have been significant reduction of inflation rates, the main cost being a loss of foreign exchange reserves and a substantial decrease of real wages. The Mexican stabilization experiment is usually presented as a successful case of adjustment to the external sector crisis and inflation reduction. A decisive test of the program, however, will take place when prices and wages were liberalized.

Ignácio Rangel is one of the few Brazilian economists to reflect on the relationship between business cycles and the history of Brazilian economics. In this article, we utilize this subject as a connecting “thread” of part of his work.

This article discusses the impact of the regulation of the Brazilian wheat market on the industrial structure of the wheat flour and the possibility of the subsidy absortion by the in-dustry. First, it is remarked the institutional aspects of the wheat flour industry. Then, the framework used was based on indicators developed in Industrial Organization theory, that indicates that the regulation is not the cause of the increase in market concentration nor that the industry absorved the subsidy. On the contrary, it seems that the industry real profit decreased during the relevant period of subsidy policy (1970-80).

This article deals with Keynes’ contribution on the recovering of the income and employment levels of growth. Contrary to the (neo) classical approach, Keynes argues that unemployment and the fall of nominal wages are not necessary to economic recovering. Even with fixed nominal wages and increasing primary costs, economic growth on the short run, via effective demand expansion allows firms to maximize their profits through the reduction of the real wage caused by the increase of general price level. On Keynes’ view, the incompatibility between the sus-taining of real wage level and the short run economic recovering arises from his critical refor-mulation of the principle of decreasing returns, as stated by the (neo) classical theory of produc-tion costs and supply prices. However, still in a Keynesian perspective, this incompatibility, if taken for granted it is not a theoretical request for the analysis of economic growth on the long run.

The commitments and working requirements of abstract, applied, and art of economics are assessed within an analogy with the fields of inert matter and life. Abstract economics is the pure logic of the phenomenon. Applied positive economics presupposes many distinct abstract sciences. Art presupposes applied economics and direct knowledge of the specifici-ties which characterize the time-space individuality of the phenomenon. This is an indetermi-nation clearly formulated by Senior and Mill; its connection with institutionalism is discus-sed. The Ricardian Vice is the habit of ignoring the Indetermination; its prevalence in mains-tream economics is exemplified, and its causes analyzed.

In this paper are analyzed (1) the conditions that gave rise to hyperinflation in early 1990, (2) the alternative programs of stabilization that were being suggested, and (3) the stabiliza-tion plan that was finally adopted, the Collor Plan, whose failure the authors, writing in June 1990, predict already in the title of the paper: “the first Collor Plan”. This plan examined according to (1) the logic behind freezing 70% of the financial assets; (2) the fiscal adjust-ment aspect; (3) the monetary or liquidity question; (4) the demand problem; and finally (5) the causes of the resurgence of inflation with recession. For this analysis, the authors utilize a neo-structuralist approach to the inertial or autonomous inflation prevailing in Brazil.