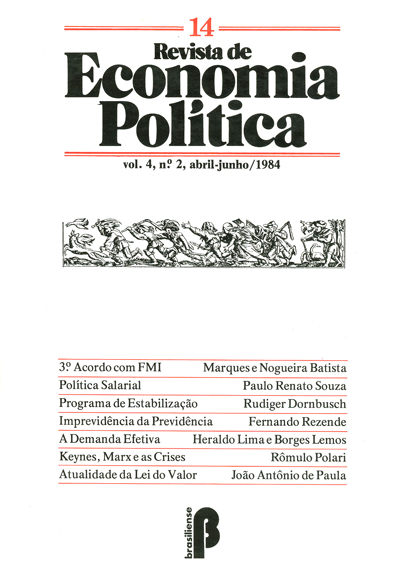 This paper discusses the recent evolution of negotiations between Brazil and the IMF. Section 1 presents a short survey of the difficulties encountered during the first phase of negotiations from November 1982 to September 1983. Section II examines policy targets for 1983 and performance criteria for fiscal policy, monetary policy and the external sector. The general outline of the IMF programme for Brazil in 1984-85 is analyzed in Section III, where it is shown that its basic guidelines are based on questio-nable assumptions and that the speed with which the adjustment is being attempted may be incompatible with Brazil’s objective situation. The final section provides a brief summary of the main conclusions.

This article deals with the political debate concerning the Brazilian wage legislation during the second semester of 1983. It explores the reasons behind proposals based in full price indexation but suggests that measures which maintain the level of real mean wages during periods of wage readjustment are a realistic first step in a policy aimed at real wage recuperation in a non recessionary environment. The article discusses some mechanisms of real average wage maintenance, including a sliding scale of readjustments not based on fixed adjustment periods. Complementary measures dealing with price controls and broader macroeconomic policies are discussed in closing.

There are two main approaches to the analysis of the present financial crisis of the social security system. To some, the crisis has structural roots, as the gap between benefit payments and payroll contributions tend to rise in the absence of a profound reform in the system. To others, the explanation is still one of a conjunctural nature as the recessive policies have opposite effects on the two sides of the social security budget: lower revenues cannot match an increasing expenditure in a situation where the benefits are fully indexed. The paper reviews the main arguments of these two versions as well as additional explanations that refer to a premature liberalization of the benefits and the lack of a sound financial policy in the past, which did not allow the accumulation of reserves to face periods of distress. The main propositions following the distinct interpretations of the crisis are, then, analyzed, the emphasis being on the redistributive effects of cutting benefits and/or changing the financial basis. The paper ends by arguing that before going into the discussion of specific measures to solve the crisis, it will be necessary to appraise the degree of protection offered to distinct social groups through the social security system.

The central purpose of the article is to explore some consequences of the absence of notion of turnover-time (or an equivalent) in the formulation of the theory of effec-tive demand. It opens with an attempt to redefine the schemes of reproduction in order to get expressions, which can best support the relevant discussion. Then it goes on to the examination of the assumptions the principle of effective demand requires to operate and finally suggests the way the concepts developed in book II of Capital might be helpful to explain the cyclical fluctuations of capitalism.

This article analyzes the limitations of explication and solution offered by Keynes, in respect to the capitalistic economic crisis, in the light of Marx’s ideas. Firstly, it discusses why Keynes even apprehending the capitalism crisis vocation, operating in “laissez-faire” conditions, does not understand its causes, immanent to the development of the capitalistic production relations. It also attempts to show that only in a non-time related perspective, the Keynesian solution would be able to attenuate the contradictions inherent to capitalism and to resolve the problems from its crisis. Finally, it develops new ideas in an attempt to present as sufficiently steady the affirmation that, in the middle and long run the keynesians “remedies” tend to aggravate the contradictions which caused the crisis and create news problems, inconsistent with capitalistic interests.