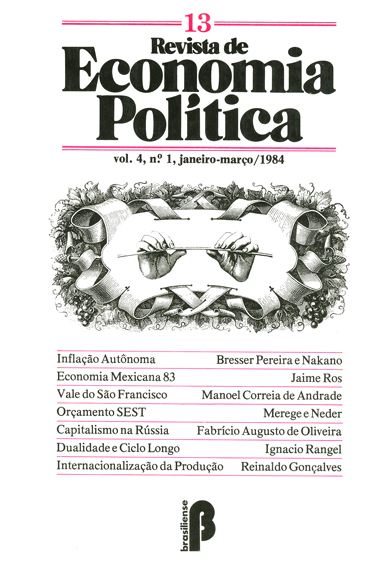 Industrial Bourgeoisie assumes the hegemonic role, which had belonged until then to the feudal large estates. This is the great transformation that occurred in the Brazilian society in this recessive stage of Kondratieff’s cycle. The principal areas of this stage in Brazilian economic crisis are analyzed as well and pointed out the two main aspects which will have to orient the overcoming phase of this crisis: the privatization of public services and the greater intervention of the State in foreign trade.

This work focus on the transition period in which the main conditions for the capi-talist mode of production was established in the Russian economy. The choice of this country was due to the especial characteristics of its developmental pattern. In the Russian economic history, as opposed to the British case, State and the foreign capital were the main responsible for the country’s economic changes. On the other hand, me formation of a capitalist system has been based upon the big land ownership and upon the peasant impoverishment, instead of a really revolutionary way based on peasant economy. The study has tried to grasp the historical process which has generated the internal market to capitalism and to appreciate the role of both the State and the foreign capital in the large industry formation which, in fact, had already been a reality at the end of l9th century.

This article attempts to analyze the methods utilized and results achieved by the State in the policy of Vale do São Francisco’s economic revitalization. The importance of this valley results of its geographical situation; in spite of cutting off a half-arid region, São Francisco is an abundant and perennial river. By reason of its waterfalls, it allows the construction of barrages, which will be used for energy production and for the development of irrigated agriculture as well. The government policy, which has provoked the use of funds and utilization of moderns techniques which have not contri-buted for better living conditions for the local population, is also analyzed. Thus, there is a modernization without social-economic development, in view of the model utilized by State intervention.

This paper attempts to analyse the relations between the crisis and Mexican economic policy, basically focusing three points: (a) the way by which the adopted economic policy has contributed to provoke a situation of depression with hyperinflation; (b) the problems and short term prospects which derive of the limits of the adopted political stabilization scheme; (c) the problems and the medium and long term prospects which wil1 be faced by the Mexican economy during the period after the stabilization phase.

In English only in the on-line edition

In order to understand inflation or stagflation in present day oligopolistic capitalism, it is necessary to distinguish the accelerating, the maintaining and the sanctionating factors of inflation. Four are the accelerating factors: change in profit margins, change in real wages above (or below) productivity, changes in the real exchange rate and in the costs of imports. The basic maintaining factors are formal and informal indexation of the economy and mark-up pricing. Given and autonomous inflation, that is, independent of sustained demand or full employment, the fundamental sanctionating factor of inflation will be the money supply.