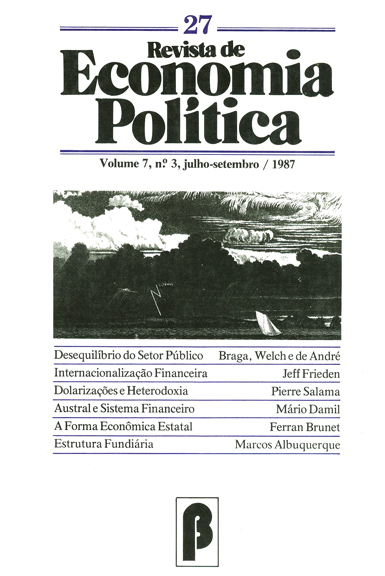 The Brazilian public sector disequilibrium, as measured by growth in the global net public sector debt to GDP ratio, is examined with and without the “Piano Cruzado”. Two models are used, one based upon a discrete time framework and the other based upon a continuous time framework, to trace paths of the debt-GDP radio for the rest of the decade concentrating on the 1985-1990 period. Two major conclusions are reached. The first, of a theoretical nature, is that discrete time models are inappropriate in an inflationary context as they severely underestimate the inflation tax. The second is that the Plano Cruzado may put strong pressure on government finances due to the drastic fall in the inflation tax.

Changes in the international financial markets implied new conditions for the financing of the Latin American foreign debts. The “dolarização” of these economies, both in the broad sense (using the dollar rather than the local currency) and strict (capital flight) sense, acquired new im-portance, intensely affecting the monetary sovereignty of these countries. As a result, new eco-nomic policies were instituted in Argentina and Brazil aimed at reducing inflation by imposing a price freeze and a general de-indexation of the economy without causing a recession as well as at maintaining a minimal servicing of their external debts. The author takes into account the external context as well as both the economic structures and the accumulation of capital, which vary depen-ding on the country and moment, as he analyzes the limitations of the measures used to slowdown the long-term “dolarização” and the main features of the “Austral” and “Cruzado” plans, which were presented as heterodox. Lastly he presents the possible need to adopt measures that are more heterodox than those foreseen in those plans: success would be a result of a partial moratorium of the payment of the foreign debts and a sensible modification of the distribution of income.

This paper analyzes the recent evolution of the monetary and financial system of Argentine economy, particularly from the implementation of “Plano Austral”, on June 15, 1985. The finan-cial system is presented through a long-term perspective, as a result of two financial reforms (1977 and 1982) whose principal features have determined the present fragile situation. The monetary system is analyzed through the behaviour of the principal monetary aggregations particularly observing the case of the evolution of different kinds of actives in the hands of the people. Accor-ding to the author, the initial impact of the stabilization plan (“Plano Austral”) had two elements that were emphasized: the increasing of the demand for monetary resources, and the reduction of the fiscal deficit.

This paper attempts to conceptualize the forms of Public Administration from the Marxian political economy. This research is exposed in two parts. In the first one we stablish how the capi-talist forms of production shapes the State organizing activities. The social necessary activities who can’t produced in commodity and/or in capitalist ways must be developed in administrative forms by the state agencies and corporations. Through this the contradiction and the comple-mentation between accumulation and State. In the second part of this research we analyse systematically the subject matters, aims and capacities of the Public Administration.

This paper is an attempt to analyze land ownership patterns in Brazil and their relation to economic variables such as production, productivity, land use and profitability. Some conclusions and derived with respect to the implementation of the land reform program and its effects on the economic aspects of the Brazilian agricultural sector. The main conclusions are: a) from an economic point of view land should be treated 011 equal terms with any other factor of production; b) there is no evidence as to land being extensively used with speculative purposes; c) no significant change has been occurring in regard to the heavily concentrated land ownership pattern observed in Brazil; d) no significant differences were observed among different size-group of farms with respect to economic efficiency (partial productivity differences are explained by differences in factor availability and reflect proper resource allocation behavior by farmers); e) land-reform in Brazil, such as proposed by the government, is not the correct policy to promote agricultural growth and development.