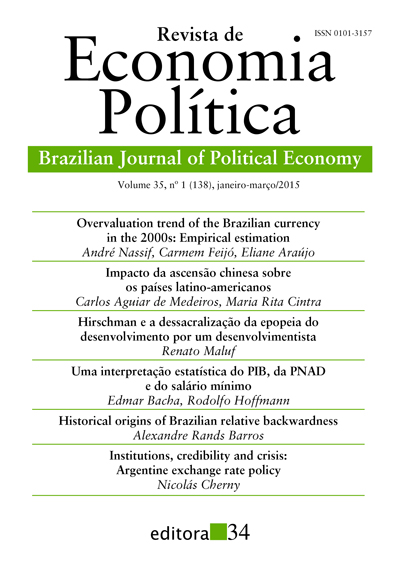 We review in this paper the expansion of economic relations between China and Latin America Countries (LAC) in the last decade. The large process of Chinese urbanization was the main driver for LAC commodity exports and China became the largest market for export and large supplier of manufactures for many LAC and its contribution for investment and credit has enlarged as well. In this process of restructuring of international division of labor we considered two different effects, a “demand effect” and a “structure effect” and investigated how complementarity and competitive pressures affected trade within region and in LAC according to their different patterns and productive structure.

Hirschman and the desecration of epic development by a developmentalist.
Renato Sérgio Maluf
Brazilian Journal of Political Economy
View Article

The essay presents a reading of Albert Hirschman’ work aiming at highlighting his differentiated approach to economic development while exploring the economic, social and political dimensions involved in joining economic growth and social equity. Some concepts and references gain importance in this effort such as possibilism, hidden rationalities, unbalanced growth, social conflicts, unintended consequences and open solutions. Latin American countries are the main empirical reference, with specific concerns on the food question involved in development processes.

Why has household income in the National Household Survey (PNAD) grown so much faster than household consumption in Brazil's GDP from 2011 to 2012? To provide an answer to this question, we start from a visualization of the importance of the minimum wage in PNAD's income distribution and from a hypothesis that the underestimation of incomes in the PNAD surveys is concentrated in those families whose incomes do not follow the minimum wage. We then derive an equation to explain the difference between household income growth in the PNAD and household consumption growth in the national accounts as a function of the change in the minimum wage. Our empirical estimates of this equation suggest that the behavior of the minimum wage has been an important component in the explanation of differences in income growth between the PNAD and the GDP accounts.

This paper relies on some data to identify the XIX century as the major period in which Brazil Economy lagged behind some chosen benchmarking countries, as the USA, Canada, New Zealand, Australia and some European periphery countries. To identify the reasons for this an exercise using immigration data was used to make a decomposition of the sources of growth of the Proportion of the USA per capita GDP to the Brazilian one. The results indicate that the imported human capital was responsible for 59% to 88% of this total growth between 1820 and 1900.

The purpose of this article is twofold. The first is to explain the time inconsistencies of the convertibility regime that led to the 2001 crisis. The argument suggests that the credibility requirements for convertibility induced a dynamic of legal, fiscal, financial and external commitments that increased exit costs and time inconsistencies. The second objective is to explain the tensions of the floating regime that replaced convertibility in 2002. We describe the effects of a floating exchange rate on macroeconomic imbalance and the growing tension between competitiveness and inflation.

The record of successful developmental states in East Asia and the partial successes of developmental states in Latin America suggest several common preconditions for effective state intervention including a Weberian bureaucracy, monitoring of implementation, reciprocity (subsidies in exchange for performance), and collaborative relations between government and business. Although Brazil failed to develop the high technology manufacturing industry and exports that have fueled sustained growth in East Asia, its developmental state had a number of important, and often neglected, successes, especially in steel, automobiles, mining, ethanol, and aircraft manufacturing. Where Brazil’s developmental state was less successful was in promoting sectors like information technology and nuclear energy, as well as overall social and regional equality. In addition, some isolated initiatives by state governments were also effective in promoting particular local segments of industry and agriculture. Comparisons with East Asia, highlight the central role of state enterprises in Brazil that in effect internalized monitoring and reciprocity and bypassed collaboration between business and government (that was overall rarer in Brazil).

This paper develops the hypothesis that the Brazilian interest rate is high as a result of partially obstructed monetary transmission mechanisms. Transmission failures arise due to the following characteristics of the Brazilian economy: (i) segmentation of the credit market; (ii) low penetration of free credit within the income determination process; (iii) truncated term structure of interest rates; (iv) participation of LFT’s in public debt; (v) participation of administered prices in the consumer price index. To achieve this result, the paper explores the BMW model and provides some preliminary evidence.

Brazil attracted relatively little innovation-intensive and export-oriented foreign investment during the liberalization period of 1990 to 2010, especially compared with competitors such as China and India. Adopting an institutionalist perspective, I argue that multinational firm investment profiles can be partly explained by the characteristics of investment promotion policies and bureaucracies charged with their implementation. Brazil's FDI policies were passive and non-discriminating in the second half of the 1990s, but became more ive under Lula. Investment promotion efforts have often been undercut by weakly coordinated and inconsistent institutions. The paper highlights the need for active, discriminating investment promotion policies if benefits from non-traditional FDI are to be realized.

This paper analyses reasons of the instability of the world monetary system. The author considers this problem from historical and contemporary perspectives. According to presented point of view banknotes and electronic money which replaced gold and silver coins in popular circulation are the most important reason of the instability. There are also proven positive and negative consequences of money instability. Reforms of the world monetary system need agreement within the global collective hegemony of state-powers and transnational corporations.