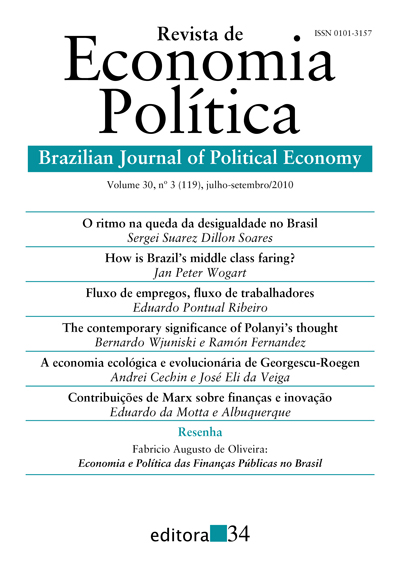 The rhythm in the fall of inequality in Brazil is acceptable?
Sergei Suarez Dillon Soares
Brazilian Journal of Political Economy
View Article

Evidences of the historical and international context. The following study uses two approaches to answer the question of whether inequality in Brazil is falling fast enough. The first is to compare the variation of the Gini coefficient in Brazil with what was observed in several countries that today belong to the OCDE (United Kingdom, United States, Netherlands, Sweden, France, Norway, and Spain) while these same countries built their social welfare systems during the last century. The second approach is to calculate for how much Brazil must keep up the fall in the Gini coefficient to attain the same levels of inequality of three OCDE countries that can be used as a reference: Mexico, the United States, and Canada. The data indicate that the Gini coefficient in Brazil is falling 0.7 point per year and that this is superior to the rhythm of all the OCDE countries analyzed while they built their welfare systems but Spain, whose Gini fell 0.9 point per year during the 1950s. The time needed to attain various benchmarks in inequality are: 6 years to Mexico, 12 to the United states and 24 to Canadian inequality levels. The general conclusion is that the speed with which inequality is falling is adequate, but the challenge will be to keep inequality falling at the same rate for another two or three decades.

Brazil’s Post War economic history has been marked by inflationary booms and busts, which kept large parts of the population poor, as income distribution remained highly skewed, and most governments failed to put enough efforts and resources into education and health. That seems to have changed recently, as an increasing number of studies have shown considerable advances in the incomes of the lower and the middle classes. This essay examines those findings and puts them into a historical perspective, discussing earlier attempts and hopes of Brazilian policy makers to advance the welfare of the population. It concludes that while the last fifteen years have been remarkable for the country to achieve macroeconomic stability and while the increasing efforts of supporting the poor seemed to have been moving income distribution slowly towards a more equal level, there is still a long way to go. The 2008 world financial crisis also hit Brazil hard, but the recovery has been smoother and faster than in any OECD country. The impact of the current crisis may provide a good test as to the robustness of the previous trends to further the wellbeing of the poor and the middle class.

Karl Polanyi is considered one of the most prominent social scientists of the 20th century. In his writings, an important concern was the relationship between the markets and the society (therefore, the state) as a whole; to discuss it, he introduced the concept of “embeddedness”, fundamental for his study of the origins and consequences of the Industrial Revolution. An important part of his heritage is the study of the economic history of what he called “ancient societies,” especially of Classical Greece. Polanyi used these studies to compare the ancient societies with his own times, in an effort to understand them all. This paper aims to relate Polanyi’s work on the Athenian society with his studies about the modern times, showing that it is possible to draw lessons from Polanyi´s thought on the relationship between the society, the state and the market that can help to design a political agenda for our days. In the first part, we present the most important aspects o the life and work of Polanyi, and in the second we discuss the most important aspects of his worldview. Then, in the third part, we study his view of the early Athenian economy; mainly, we focus on the coexistence of a kind of state planning and a market, showing how this understanding is crucial for the whole Polanyian legacy, with its emphasis in the comparison of different societies and times. We conclude by underlining the relevance of this interpretation advanced by Polanyi to understand the societies of our days, focusing on some proposals to extend his approach to deal with our contemporary problems.

The main argument of this paper is that Georgescu-Roegen’s contributions represent a major disruption with economics’ pre-analytic vision. He rejected at the same time both the closed and circular view of the economy and the mechanic analogies that oriented economics in the past century. Even though his influence has been felt mainly in the field of ecological economics, his epistemological contributions represent a major challenge to equilibrium thinking. Nowadays, treating economic systems as complex and evolutionary systems is becoming not only acceptable, but also a trend in the way political economy is made. We defend that Georgescu-Roegen’s disruption represents a scientific revolution in economics, in the sense attributed by Kuhn.

Herbert A. Simon and the concept of rationality: Boundaries and procedures
Gustavo Barros
Brazilian Journal of Political Economy
View Article

This paper discusses Herbert A. Simon’s conception of rationality in two of its principal general definitions: bounded rationality and procedural rationality. It argues that the latter is the one that better synthesizes the author’s view about rational behavior and that the former fills mainly a critical function. They are complementarily used by Simon in this sense. In spite of that, it is argued that it is the low degree of specificity of the concept of bounded rationality one of the reasons for its relatively greater success.

China’s government introduced open market reforms in 1979, mediated by industrial policies improving the ability of attracting higher quality FDI (Foreign Direct Investment), which helped China’s economy developing its technological capabilities. As a result, China’s share in international trade rose impressively becoming third-largest trading nation in the world, by 2004, also its export structure is significantly more sophisticated. Facing the importance of understanding the determinants of developing word specialization patterns, this paper focuses on the competitiveness and technological structure of exports and imports by China for 1994-1998 and 2001-2005.

The work analyzes the main theoretical trends and subjects that integrate the recent Brazilian debate about rural development. We agued that the agenda of the rural development in Brazil, on which actively participate scholars, organizations and institutions, have been formulated by the State and the public politics implemented since the beginning of the 1990. Among the factors that had influenced the emergency of the debate about rural development is distinguished the increasing social and political legitimating of family farming and the agrarian reform, the reorientation of the state policies, the increasing sharply political and ideological quarrels with the agribusiness wing and the matters about sustainability. It is also argued that the analytical and interpretative references that have being used by the scholars are still diffuse and varied, but has been capable to influence the policy makers.

Comment on the article "The behavior of the tax waiver arising from private spending on health care between the years 1996 and 2003 ".
Rodolfo Hoffmann, Fernando Gaiger Silveira
Brazilian Journal of Political Economy
View Article