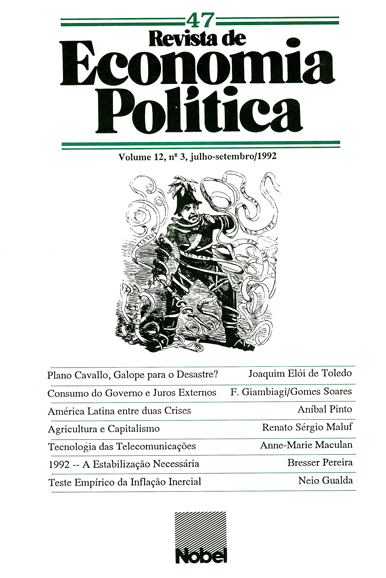 This paper analyses the latest stabilization effort in Argentina, the Cavallo Plan (named after its mentor, Domingo Cavallo). The analytical framework is the tradeable non tradeable textbook model, a.k.a. the dependent economy model, from the Australian trade literature. The model is extended to include the effect of real wages on aggregate demand, and therefore on activity. A Phillips— curve description of inflation is also added. It is shown that, by moving from a floating to a fixed-exchange rate regime, the Argentinean economy attained domestic equilibrium, at the cost of BoP equilibrium. The paper shows that the ensuing trade deficit may lead to a classical run on reserves, forcing the return to floating exchange rates. In the process, the economy will go through a complete economic cycle, returning to inflation.

This work, to begin with, draws attention to the clear contrast between the intensity and evolution of the crisis of the thirties and the one that bursts into the early eighties, originating the so-called “lost decade” which, in fact and except for few exceptions, has not yet been overcome. Several main issues are emphasized. On the one hand, the incidence of the first crisis was substantially more serious than the second. On the other, the external circumstances were more disadvantageous and prolonged due to the repercussion of the crisis on the “central economies” and the incidence of the Second World War. In spite of these circumstances, most of the Latin American countries could initiate their recuperation and maintain their so-called ‘inward development” up to, approximately, the sixties. In the last part, after analyzing different facts which influenced the evolution mainly, the role played by the central economies in the two recalled crisis , emphasis is made on the fact that we “live in another Latin America” and that it is necessary, above all, to constitute other socio-political agglomerations inherent to the internal and external realities of present time.

This paper analyses the evolution of Brazilian public sector expenditures during the second half of the 1980’s. The interpretation according to which the fiscal crisis is exogenous and caused by the external debt interest is criticized. The great increate in current expenditures after 1984, together with a budget restriction that limited public investment is discussed. Based on it, public sector consumption and not external debt interest payments is considered the most important factor responsible for the public investment trajectory over time during the last five years.

This paper presents an alternative view of agricultural commercialization iii the capitalist development process in Brazil, in contrast with the functionalist approach derived from neoclassical economic theory. Agricultural commercialization is a capital circulation activity whose form depends on the social organization of agricultural production and the development of capital concentration, both determined by the modernization process of the Brazilian economy. The conclusion remark upon the tendency toward subordination of circulation activities, the growing importance of different types of capital (agrarian, commercial, agro-industrial and “entrepreneurial co-operatives’) and of the financial appreciation of capital used in agricultural production and circulation.

The objective of this paper is to test empirically the theoretical formulation of Bresser Pereira & Nakano’s article, “The accelerating, maintaining and sanctionating factors of inflation” (1984). The empirical test supports the results of their theoretical study. The role of the distributive conflict as a maintaining factor in the inflation process stands out since past inflation creates strong downward price rigidity. Another hypothesis that was shown to be consistent refers to the character of money as it represents an endogenous variable iii the system.

The industry of telecommunications equipments is considered a strategic high-technology sector and needs large long-time investments in R&D. During the last three decades, the technological strategies of multinationals corporations which control 80% of the world market has been shaped according to two patterns. During the 60’s and 70’s, the telecommunications public administration used to the technical basis of the main equipment systems, to finance and realize R&D projects jointly with local firms, to allocate them the public purchases. This has permitted to strengthen the local firms on the national and international market. Since the 80’s, fusions, mergers and technological agreements traduce a concentration process. Japanese and European corporations intensify their direct investments iii the US market. The competition grows rapidly in the desregulated small equipments market.