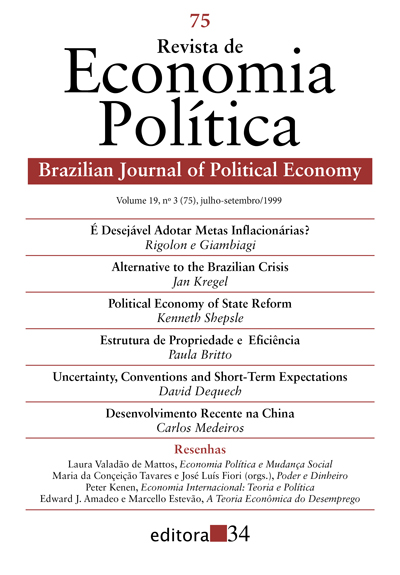 This article deals with the possible adoption of explicit inflation targets by monetary
authorities in Brazil, following the example of the experiences of New Zealand, Canada,
the United Kingdom, Sweden, Finland, Australia and Spain. Inflation targets would
work, first, as a coordination device for those involved in the price and wage setting process,
and second, as a transparent aim of the monetary policy, whose performance would be
evaluated by the adherence of inflation to the targets. The paper shows the motivations
that explain the adoption of the regime, discusses its theoretical fundamentals, and analyzes
the problems and trade-offs related to its implementation in practice. Finally, based on the
theory and the international experience, some arguments in favour of the adoption of the
regime of inflation targets in Brazil are developed.

In difference from Asia, high interest rates and stable exchange rates associated
with the Real Plan did not produce a corporate debt deflation because of the low corporate
indebtedness in Brazil. Instead high interest rates caused both the foreign and fiscal balances
to deteriorate, reducing confidence. Any attempt to reduce interest rates brought the threat
of currency weakness and the risk of inflation. The crisis was due to the reliance on high
interest rates to attract capital flows which were insufficient to produce investment which
gave a satisfactory rate of growth.

The reform of governmental institutions is presently quite salient as many countries
struggle with transitions to democracy. It is a constant preoccupation of developing
countries as well as of highly developed democracies like Great Britain. International organizations
like the World Bank are especially interested in the prospects of political reform
for jump-starting national economies currently languishing in poverty and slow growth. For
many commentators on these issues, at the Bank and elsewhere, politics is the source of problems.
Politics (and politicians) are held in disdain and reformers are encouraged to design
schemes insulating economic policies from politics. This is wrong-headed. The present paper
provides a political-economy framework in which political ambition figures prominently
and yet a constructive attitude toward politics is accommodated.

This article discusses the influence of the ownership structure over the efficiency.
The framework used is the incentive theory, in which the principal must build an incentive
scheme, which induces an agent to act optimally. First, we verify the reasons for public
intervention in industries with market failure. Following, we study the deterioration of the
incentive structure over managers as a result of the ownership change. So, we verify how the
structure of incentives can be restored with the firm’s privatization, with the maintenance,
by the government, of some control over the firm. Finally, we make a brief exposition about
the regulatory instruments.

Contrasting different views on the topic, this article examines whether short-
-term expectations involve uncertainty, arguing in favour of an affirmative answer and thus
invalidating any association with the rational or adaptive expectations hypothesis. It is then
argued that the presence of uncertainty precludes any tendency towards equilibrium. After
the notion of the state of short-term expectations is introduced, this conclusion is affirmed
to be valid even if one considers that producers often follow conventional behaviour. Defending
the view that uncertainty should be considered as gradable, the article maintains that
conventions reduce but do not eliminate uncertainty.

This small article is part of a communication about French firms in Spanish
America. This one is only about Brazil. On Brazil we had two opportunities to study the
history of French investments in that country during the XIXth and XXth centuries. Here
we are passing from a macroeconomic and global to a microeconomic and entrepreneurship
point of view. The French position in Brazil since 1800 can be resumed in some words: a
very weak demographic presence but a very strong cultural one and an economic one in
between. Of that economic presence we did not study the commercial aspect but only the
financial one. It looks convenient to remember to our public some typical features of this
financial aspect before examining some types of French firms that engaged in the Brazilian
economy.

The Chinese recent economic development is one of the most important achievement
of this century. During the 80s the American strategy to defeat the former Soviet Union
and its commercial and exchange policies aimed to diminish the Japanese trade superavit
were important factors to the Chinese development strategy. This consisted of a wide and
complex set of industrialization policies aimed to affirm the Chinese sovereign over its territory
and population.

This article is an assessment of the latest 20th Century American farm bill [the
Federal Agricultural Improvement and Reform (FAIR) Act of 1996] in the context of the
current agri-environmental transition. The arguments are organized as answers to four basic
questions: (1) What is the emergent agri-environmental transition? (2) How is it manifesting
itself in the US? (3) Why is the 1996 farm bill so important? (4) What are its key provisions?

ln this article Feldman’s model of investment allocation (1928) is disaggregated
to study the implications of introducing the structural change process in it. It means that the
analysis proposed here is carried out in a multi-sectoral framework, where both productivity
and demand are changing at a distinct rate in each sector. Feldman’s model is then shown to
be a particular case of Pasinetti (1981, 1993) and an equilibrium path is established. Finally,
we analyze the possibility of maintaining equilibrium over time and normative conclusions
are obtained.

This article examines Turgot’s capital theory. It calls attention for his methodological
procedure in deriving first the very concept of capital out of the analysis of circulation,
for then to inquire on its possible employments, among them that of acting as advances
in production. In doing so, Turgot changes into a logical result what was a mere supposition
of the physiocratic analysis, namely, the existence of a class of entrepreneurs as the owners
of required amount of resources for carrying on production.