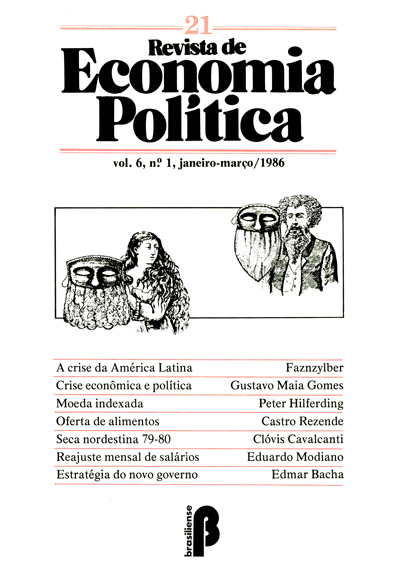 Starting from the realization that political crises have typically occurred in Brazil at the same time in which economic crises were also taking place, this paper attempts to inquire into the reasons for this coincidence. In the first two sections, a theoretical analysis is developed which puts forward some reasons why economic crises are prone to generate political crises. In the rest of the paper, the general ideas so far presented are applied to the case of the two more recent economic and political crises that occurred in Brazil: that of the early 1960’s and the present one.

The democratization in Latin America can assert a new paradigm of development for the region. This hypothesis is considered from the analysis of both external and internal economic challenges, and from the democratization’s economic potentialities. The greatest challenge is transcending those modalities of economic, social and political orga-nization, which originated the authoritarism and its various modalities. The democratization’s intermediate and long time potentialities are analyzed in the circuit of social innovation, creative-ness, public administration and regional integration, excluding the neoliberal conceptions in “Cone Sul” in order to suggest a new ways and means to progress.

The paper assesses the socio-economic nature of the 1979/80 drought in the Northeast on the basis of a survey conducted by the Joaquim Nabuco Foundation. It purports to show the essence of the difficulties that a drought brings to the population of its official victims — those enrolled in the Emergency Program coordinated by SUDENE, a sample of which was interviewed. A conclusion of the study reveals that the effects of a drought are more intense, the poorer the affected social strata. Another conclusion indicates that the official refugees’ production of subsistence crops had a decline of around 70 percent in 1978/80.

This paper presents evidence that production of some basic food crops in Brazil is characte-rized by singular technical and social features vis-à-vis other food and export crops. After propo-sing an analysis of this differentiated production structure, the paper goes on to argue that these food production’s singularities have the consequences of: 1) making the share of labor cost in total unit cost higher in the production of these food crops; and 2) producing a negative impact of economic growth upon food supply, due to the improved employment opportunities in the urban and rural labour markets. An implication of this analysis is the attribution of lesser emphasis on the inter-relationship food/export crops within agriculture, in favor of greater emphasis on the inter-relationship food production / overall labor market conditions.

A plan to combat inflation, specially the galloping inflation, is stated in this paper through a simples method which, using a combination of the income policy and a very moderate restriction of demand, consists in the introduction of a new currency or the price-stable “secondary cur-rency”. After its introduction, the prices and the principal incomes should be frizzed. According to the author, the success of this plan, for any country, will depend on the obedience to important requirements about its budgetary deficit and current account deficit.