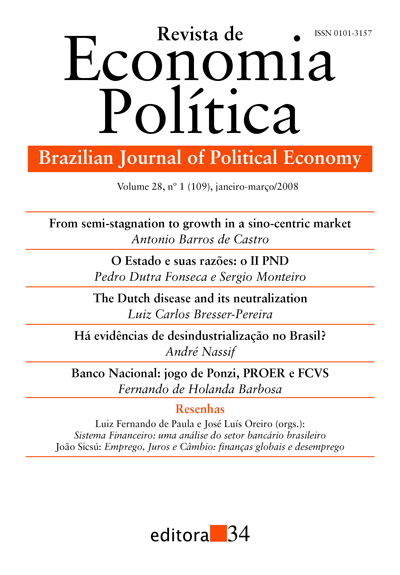 According to recent available information, the Brazilian economy may be entering a cycle of sustained growth. The dominant current interpretation points to the progresses made in terms of monetary stability, Balance of Payments and structural reforms. Indeed, without monetary stability and the commercial opening of the economy, investments would not be increasing and credit growth would not be helping the emergence of millions of new consumers. But these achievements should be taken as generally conditioning, rather than actually shaping the new picture. Some unexpected (not rarely positive) consequences of overcoming the long enduring semi-stagnation, the emergence of China as a major player, and its consequences on the necessary re-structuring of the Brazilian industry, seem to be decisive in the present day redefinition of the Brazilian GDP growth potential.

This paper intends to contribute to the debate on the reasons why the Geisel administration (1974-78) chose – as it faced an adverse conjuncture – an accelerated growth agenda which was materialized in the 2nd PND (National Development Plan). In order to do so, it resorts to a methodological definition which is based upon an institutionalist approach and favors the interaction between the political and the economic variables. Contradicting the literature that interprets the strong presence of the State and the regional decentralization of the 2nd PND as signs of neopatrimonialism, it is advocated that this category of analysis is inadequate to explain the government’s choice, although this aspect is embedded in the Brazilian social-historical formation. The political rationality of the plan must be investigated in the conjuncture itself, marked by the liberalization project, which does not clash with the plan’s economic rationality – on the contrary, it is complemented by it.

The Dutch disease is a major market failure originated in the existence of cheap and abundant natural or human resources that keep overvalued the currency of a country for an undetermined period of time, thus turning non profitable the production of tradable goods using technology in the state-of-the-art. It is an obstacle to growth on the demand side, because it limits investment opportunities. The severity of the Dutch disease varies according to the extent of the Ricardian rents involved, i.e., according to the difference between two exchange rate equilibriums: the ‘current’ or market rate and the ‘industrial’ rate – the one that make viable efficient tradable industries. Its main symptoms, besides overvalued currency, are low rates of growth of the manufacturing industry, artificially high real wages, and unemployment. Its neutralization requires managing the exchange rate. The principal instrument for that is a sales or export tax on the commodities that give origin to the Dutch disease. In order to neutralize it policymakers face major political obstacles since it involves taxing exports and reducing wages. Finally, this paper argues that there is an extended concept of Dutch disease: besides having its origin in natural resources, it may arise from cheap labor provided that the ‘wage spread’ in the developing country is considerably larger than in the developed one – a condition that is usually present.

Are there evidences of deindustrailization in Brazil?
André Nassif
Brazilian Journal of Political Economy
View Article

This paper aims at analyzing the theoretical concept of deindustrialization, and evaluating if Brazil, following the implementation of economic reforms in the 1990´s, has suffered from a “new Dutch disease”. Despite the manufacturing sector declining participation in the Brazilian Gross Domestic Product (GDP), the empirical evidence show that the changes in the economy structure since the mid-1980´s to the end of 2005 should not be described as deindustrialization. Since there was not evidence of either generalized reallocation of resources towards industries based on natural resources, or a pattern of export specialization in goods technologically based on natural resources or even on labor, one cannot conclude that Brazil was infected by a “new Dutch disease”

This article offers elements for a reorientation of the subject matter of the discipline “Comparative Economic Systems” with the impact of the fall of the Berlin’s wall. Thus, we argue that in the context of the modern democratic society the political choice between society models occurs in a narrower set of options. Thus the study of pure forms of socialism is of historical interest, but he is not relevant to this discipline since it must prioritize the debate around the choice of compatible alternative models within the rule of law. So the article offers a new program for this discipline, able to describe and to understand the diversity of systems between countries that had opted for mixing market economy.

On monetary economies the Finance-Investment-Savings-Funding circuit (F-I-S-F) prevails. Investment precedes savings. This circuit was worked out for a closed economy. This study seeks to demonstrate that the circuit F-I-S-F also prevails for open economies. A second point studied in this paper relates the relationship between budget deficits and savings restriction for investment. Conclusions highlight that the circuit F-I-S-F prevails for open economies and that budget deficits do not cause savings restriction for investment. In some situations budget déficits transfer the effects of investment for national savings formation from domestic economy to the rest of the world.

Based on recent discussions regarding the rhetorical perspective in economics, this paper presents an interpretation of the philosophical approach of Habermas which attempts to rescue the so called ´modern spirit´, forgotten in the annals of the 19th century, similar to that presented by Marshall Berman in 1982. Following the reconstructive approach of Habermas´s project of modernity, we attempt to show how a ´rhetorical approach´ could be applied in the field of economics, and yet still be clearly modern by taking into account intersubjectivities, given the expanded sphere of human communication (as defended in the theory of communicative action of Habermas). In this sense, we will seek to demonstrate the philosophical limits of the anti-rhetorical critiques of, for example, Paulani (1996, 2003, 2005, 2006), which seem to underestimate the linguistic and intersubjective aspect of Habermas´s philosophical project that can also be found in McCloskey’s methodological approach.

The aim of this paper is to reply the critical observations made by Fernandes, Rego and Gala in this number of Revista de Economia Política about a paper of mine, also published in this same journal in January 2006, which deals with the relationship between Economics and Rethoric and its unfolding in Brazil. Answering these critical observations I have tried to show that: a) it is not easy, as they do, to associate Habermas’s project to the defense of the approach of Rethoric in Economics; Habermas himself has a lot of objections to the association of his project with Rorty’s pragmatism which seems to be the strongest McCloskey’s influence; b) it is not true that my considerations have a kind of epistemological immunity and that they are not liable to contestations; if it seems so it is because the nature of the materialistic approach itself. At the end I observe that my carpers didn’t reply my observations about the unfolding of the rethorical project in Brazil and that this is, at some measure, surprising, because they are central personages in it.