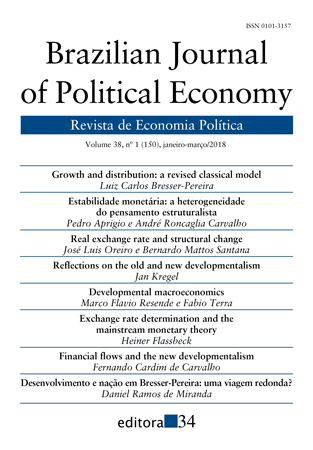 This paper discusses distribution and the historical phases of capitalism. It assumes that technical progress and growth are taking place, and, given that, its question is on the functional distribution of income between labor and capital, having as reference classical theory of distribution and Marx’s falling tendency of the rate of profit. Based on the historical experience, it, first, inverts the model, making the rate of profit as the constant variable in the long run and the wage rate, as the residuum; second, it distinguishes three types of technical progress (capital-saving, neutral and capital-using) and applies it to the history of capitalism, having the UK and France as reference. Given these three types of technical progress, it distinguishes five phases of capitalist growth, where only the second is consistent with Marx prediction. In the final phase, corresponding to financier-rentier capitalism and neoliberalism, the profit rate recovered from the fall of the 1970s, while wages have been growing below the growth of productivity.

The paper evaluates the assumption of a homogeneous theory of monetary stabilization in early Latin American structuralist economics. Starting in the 1950s, the growing and continuous inflationary problem in the region was seen as a result of bottlenecks within the productive structure. However, the channels that transmit such imbalances onto prices are framed quite distinctly amongst the aforementioned writers, with implications regarding their policy suggestions. The paper underlines a methodological flexibility, which engendered a fragmented theoretical framework of analysis, and the notion that inflation was part of the process of economic development. The combination of both elements unveiled an analytical deficiency within Cepal’s theory of monetary stabilization. As a result, there arose a tension between Prebisch’s Anglo-Saxon Keynesian view and the original theory proposed by Noyola and Furtado. The paper traces the nature of such disparities and the extent to which they impaired the constitution of a unique theoretical corpus on matters of stabilization.

The objective of the present article is to develop a Kaldorian Growth model that (i) had a balance of payments constraint, in order to eliminate the inconsistency of balance of payments growth models; and (ii) defines a precise mechanism by which the level of real exchange rate can affect long-term growth. An important innovation introduced in the model is the idea that Kaldor-Verdoorn coefficient – that measures the sensibility of growth rate of labor productivity to output growth – depends on the share of manufacturing output on GDP. This hypothesis allowed us to introduce the possibility of structural change, defined as a dynamic process by which the share of manufacturing industry on real output could change over time. In this case, it will be possible to analyze the dynamic properties of the model either in the case where productive structure is kept constant (case with no structural change), as in the case where it evolves over time as a result of some economic process (case with structural change).

New Developmentalism provides a view out how it incorporates the positive contributions of early development theorists concerned with to the past of development theory as well as a view to the future. This assessment points the similar problems of the importance of exchange rates in the development process to provide a contemporary version of the theory adapted to the twentieth century world of globalization and financialization.

Authors from distinct schools have studied the relationship between the exchange rate, investment and growth. This relationship is key for the named Developmental Macroeconomics, whose leaders have just recently started to compound a systematic model evolving all the ideas they had worked out since long ago and after several papers published in Brazilian and foreign Journals. The aim of the paper is to critically assess the Developmental Macroeconomics (DM) model. DM argues that the exchange rate in the lower and medium developed economies (LME) tends to be chronically and cyclically overvalued begetting a barrier to investment and growth in the manufacturing industry, which is the best to provoke the productive enhancement of any economy, preventing the convergence of per capita income between LME and developed countries. We conclude that DM contributes to the literature in many points. Nonetheless, DM model is misleading in some points, showing some mistakes and contradictions. It yet needs fulfilling several branches to construct a full model to explain why some LME do not reach sustainable growth and do not converge their per capita incomes to that of developed economies.

Developing countries in general need flexibility and a sufficient number of instruments to prevent excessive volatility. Evidence does not support the orthodox belief that, with free floating, international financial markets will perform that role by smoothly adjusting exchange rates to their “equilibrium” level. In reality, exchange rates under a floating regime have proved to be highly unstable, leading to long spells of misalignment. The experience with hard pegs has not been satisfactory either: the exchange rate could not be corrected in cases of external shocks or misalignment. Given this experience, “intermediate” regimes are preferable when there is instability in international financial markets.

New Developmentalism has focused its attention on trade problems created, to a large measure, by the divergences between the exchange rate that keeps the current account of the balance of payments balanced and what it calls industrial equilibrium exchange rate, the rate that would preserve the competitiveness of manufacturing firms operating at the state-or-art frontier. ND acknowledges that these rates may be disturbed by financial flows, but the role of capital account movements may be underestimated. The paper argues that financial flows have indeed been underestimated, which may make more difficult to devise efficacious policies to correct the problem of currency overvaluation.

The purpose of this paper is to present the main heterodox (not determinist) contributions to the time approach in economics. Also it is looking for to compare the dominant (determinist) view with the not determinist one. In addition, it seeks to contribute to the understanding of the reasons why the deterministic approach of time is still dominant -and perhaps hegemonic- among the economists. This circumstance has remained so despite the fact that the alternative view (not deterministic) has proved to be most appropriate to its object and it has been gaining importance and significant attention in a wide range of scientific disciplines. This article seeks to advance an explanatory hypothesis for this paradoxical and intriguing situation, without claim to offer, however, a complete or definitive answer to this important and intricate issue.

In recent years, a number of illegal activities operated under the radar of conventional analysis have taken place in Brazil. This study proposes an Extended Keynesian Model in order to understand this phenomenon, a model that explains that crises happen because of the replacement of productive activities with unproductive and destructive activities. The model is used here to examine Brazil's socioeconomic history since the institution of the economic plan that established the actual currency “Real” (R$), concluding that as the plan’s concern was predominantly with stabilization and not growth, productive activities have never been promoted on an appropriate scale. This has paved the way for the advancement of unproductive and destructive activities which have ultimately led to the country’s increasing degradation.

There is a belief amongst part of Brazilian economists alluding to the possibilities of economic analysis which excludes ideological influences. The neoclassical orthodoxy establishes its scientific pretentions based on the premise of its own neutrality, influencing the national economic debate: the not recognizing of its ideological character, as it drains significant focal concepts such as inflation, inhibits the discussion from which it belongs. This essay queries such content shift, which synthesis prompts through the inflationary thematic. Featuring this conceptual “void” as moment of loss from its analytical efficacy, though, because of it, resizes its part as ideological mean.

The text consists in a presentation and comments to translated extracts of Marx's revision notes – published here for the first time in Portuguese – to the second edition of Capital (1872). The content of these excerpts stresses the social character of value objectivity and point to the importance of the value form analysis in Marx's social critique. Departing from the different treatments of the value form as they appear in Contribution to the Critique of Political Economy (1859), Capital (1867) and Capital (1872), the text highlights the precise object of Marx's investigations, its difference regarding the method of classical Political Economy and some practical aspects derived from his critical conception.