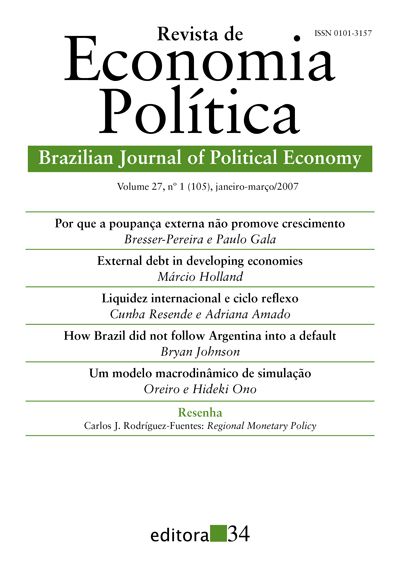 Why foreign savings fail to cause growth

The present paper is a formalization of the critique of the growth with foreign savings strategy. Although medium income countries are capital poor, current account deficits (foreign savings), financed either by loans or by foreign direct investments, will not usually increase the rate of capital accumulation or will have little impact on it in so far as current account deficits will be associated with appreciated exchange rates, artificially increased real wages and salaries and high consumption levels. In consequence, the rate of substitution of foreign savings for domestic savings will be relatively high, and the country will get indebted to consume, not to invest and grow. Only when there are large investment opportunities, stimulated by a sizeable difference between the expected profit rate and the long term interest rate, the marginal propensity to consume will get down enough so that the additional income originated from foreign capital flows will be used for investment rather than for consumption. In this special case, the rate of substitution of foreign for domestic savings tend to be small, and foreign savings will contribute positively to growth.