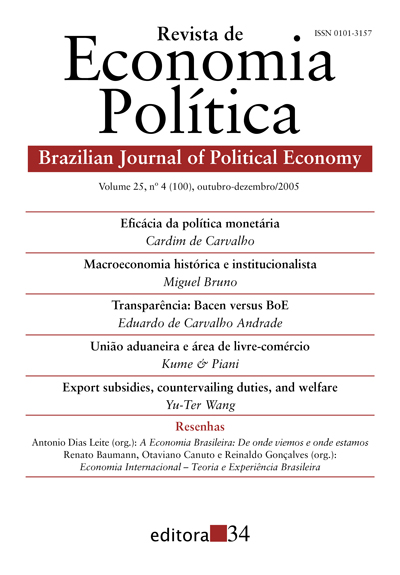 Carvalho, Fernando J. Cardim de. 2005. “A Contribution to the Debate on the Efficacy of Monetary Policy and Some Implications in the Case of Brazil”. Brazilian Journal of Political Economy 25 (4):323-36. https://centrodeeconomiapolitica.org.br/repojs/index.php/journal/article/view/645.
ACM ACS APA ABNT Chicago Harvard IEEE MLA Turabian Vancouver

The main opposition between Keynesian and Classic monetary theories is defined by the former’s proposition of money non-neutrality in the long period. According to Keynes, it is not possible to describe a monetary economy’s long period position without first specifying the monetary policy it is adopting. The policy is described by the choice of the short-term interest rate which exerts an important determining influence on the long term rate and, therefore, on real investment decisions. Based on this reasoning, inflation target monetary policy regimes are criticized, in particular the one adopted in post-1999 balance of payments crisis Brazil because of its rious impact on investment and growth.